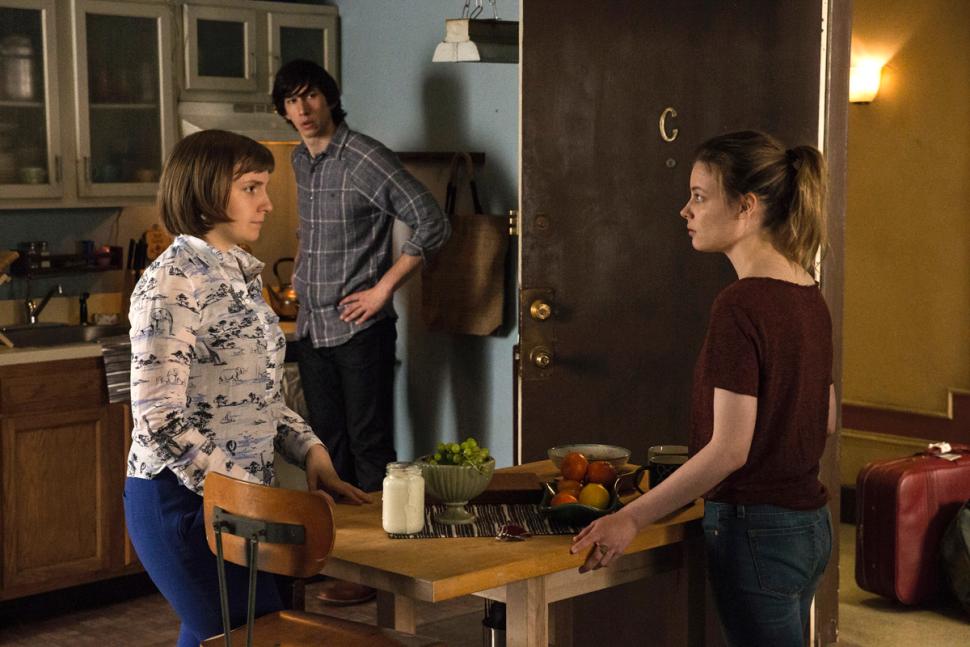 Tonight’s SNL 40th Anniversary sent my DVR into haywire mode. Its first victim was Girls, which recorded a couple of hours later…on HBO Latino. Yeah. I don’t speak Spanish. But you know what? Not being able to understand a single word other than “si” or “pequeño” makes the show almost tolerable. And way easier to recap. Here goes nada:

Hannah returns to New York to find Adam living in her old apartment with his new girlfriend. She is, of course, despondent. Because Shoshanna has nothing better to do, she comes over to console her friend. They watch a video of Adam’s new girlfriend being way smarter and prettier than Hannah and it sends Hannah into a deep sadness.

Jessa is also at Hannah’s old apartment, which is now Hannah’s new apartment, along with Adam and his new girlfriend, which makes Hannah Adam’s old girlfriend. Hannah is pissed because Jessa already knew about the new girlfriend but didn’t tell Hannah because Jessa was too busy not caring. Hannah punches Jessa, Jessa punches Hannah, and Hannah finishes the fight by flipping Jessa the bird.

Rather than face the horrors of the new girlfriend with her old boyfriend, Hannah holes up in her bedroom. She takes the quarantine very seriously and pees in a flowerpot-slash-magazine rack. When she eventually emerges from the bedroom (mind you, this is an extra bedroom, something that, much like herpes and a wardrobe constructed entirely of synthetic fabrics, every young person in New York has). Adam’s pregnant sister is on the couch receiving a foot rub from Laird. Absolutely nobody notices that not a single person, nor group of people, in this apartment can afford even a fraction of the rent, furnishings, or general decor.

They ought to just install a revolving door because now Ray is in the kitchen. Where are these people coming from? How do they have this much spare time to just wander around Brooklyn doing pop-ins? Food is being cooked, yet grocery shopping never happened. Hannah cuts her hand on bacon and Ray bandages it up like a doctor, or like someone who keeps bandages in their apartment as opposed to frantically running to Duane Reade. Then he duct tapes a rubber glove over Hannah’s hand and I feel much better about Millennials.

Oh good! Marni pops in to check on Hannah. They yell at each other so Hannah hides in the unrealistically enormous bathroom watching YoutTube videos of Adam’s new girlfriend, who I think might be a Miss America contestant from one of those square states. Marni bursts into the bathroom and explains to Hannah that Adam is with the new girlfriend because Hannah has no redeeming qualities.

With no hope left, Hannah packs her bag but Adam arrives before she can vacate the premises. He rebandages her hand because twenty-four-year-olds are known for keeping bacitracin and gauze in their medicine cabinets. He explains to Hannah that it wasn’t until she was gone that he realized just how intolerable it was to be around her all the time. She cries, begging him to take her back. “No.” He squirts some more ointment on her hand, and they part as friends.

Rather than stay with one of the many, many friends who wandered into her apartment that day, Hannah decides to live in a storage closet with the rest of her possessions.