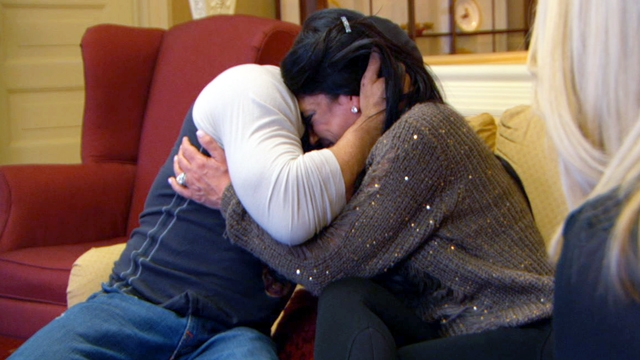 Last week ended with Joe Gorga using his head as a battering ram into Joe Giudice’s voluminous gut because Joe Gorga called Teresa “scum.” This week isn’t much better. “Teresa, help your brother!” Teresa runs out of the room yelling, “Call the cops!” Someone says, “He’s biting my nuts,” elbows are being thrown, for some reason Melissa rushes over to put Joe Gorga’s hat back on his thick head. Then, the women start shrieking at each other while team builders Steve and Stephanie silently circle the room, waiting for an opportunity to introduce trust exercises.

Rich tries to calm Joe Gorga down, and Teresa takes Joe Guidice to his room. On his way out, Joe Gorga offers advice to the team builders: Hey guys, that’s how you deal with trash, you have to become trash. Stephanie, you might want to jot that one down. Melissa also has some deep insight: Saddam Hussein, that’s someone’s brother too, that doesn’t mean he’s a good person.

According to Melissa, Joe Gorga has a heart of gold, and all he wants is his family. Oh I can totally see that, the man is an absolute teddy bear. Well, with everyone in their own rooms and the booze flowing, they decide to stay for the rest of the night. Then Rich goes to talk to Teresa. That doesn’t go so well and results in Rosie shouting, “We’re all family over here!”

Meanwhile, Melissa and Joe Gorga are crying in their bed like a coked up scene from Casino. For some reason, Rosie decides to bring Teresa over to Joe Gorga’s room so that the two of them can tawk. But Melissa won’t leave and Joe Gorga won’t look at Teresa, so Teresa goes squeaking back to Kathy’s room.

Aaaaand it’s Steve and Stephanie! “You guys have a tremendous amount of passion.” Oh hahaha, that’s cute. Steve recommends everyone “let it rest” and see how it goes tomorrow. He then bro hugs Joe Gorga, which was like watching a gazelle give a lion a belly rub.

Okay, mystery solved. After the fight, everyone had black gunk all over them, like shoe polish or very heavy mascara. Turns out it was from Joe Gorga’s hair—he sprays it with black hairspray, which is why Melissa was rushing to put his hat back on his head before FEMA showed up to clean the cast like oil-slicked pelicans.

While the rest of the family has dinner in the dining room, Joe Guidice and Teresa have “sexytime.” Or as Teresa calls it, “browchickabrowchow.” I never, ever wanted to see the two of these buffoons marinating in a bubble-free bubble bath, but there you have it. Ugh. Pass the brain bleach….

The next morning, the champagne is flowing and Rosie has hope that Doctor V. can succeed where Steve and Stephanie failed. Teresa calls Caroline to ask for help. Caroline knows it’s bad because Teresa never asks for help. “The last thing I wanted to do was go up to Lake George and get involved in the family drama. But….” Oh look! Her bag is already packed.

Doctor V. arrives disguised as a stripper and explains that she’s Italian where it matters, in her vagina. So she’s a classy kind of doctor.  Doctor V. surmises that everything Teresa says is “misinterpreted,” so at a certain point Teresa has to acknowledge her role. Melissa then goes down memory lane with Teresa calling her a stripper and cheating on her husband and the prior day’s fiasco….

In a one-on-one session with Doctor V., Joe Gorga says that he no longer wants to try to fix the situation. He then tells Teresa that he doesn’t want to fight anymore, and he needs more time away. Talking, talking, squeaking, crying, and Joe Gorga and Teresa hug it out.

Meanwhile, Caroline rolls in.  And apparently this was not the season finale, because they’re all still trapped in the “castle” for another week.