We’re still waiting for that damned wedding, and [SPOILER ALERT] will be all season, so get used to it.

Oh yeah, “I saw you and Robin at the carousel.” Why was Ted holding hands with Robin? She went to the park to dig up a locket, she couldn’t find it, she got upset, and he held her hand. 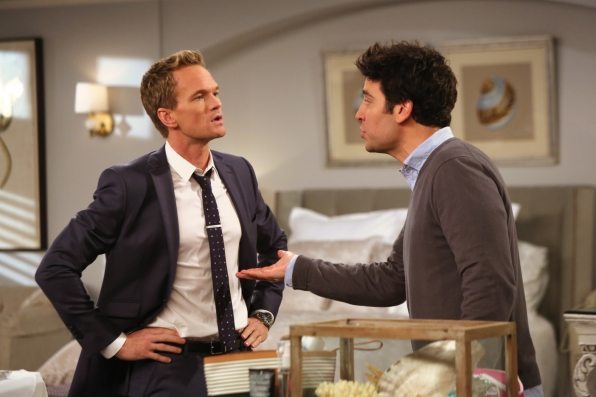 Lily’s still drinking religiously, and oh look, she brought Marshpillow, a pillow dressed up to look like Marshall with an iPad on its face for Skyping. One thing Lily forgot to do in between dressing up pillows to look like her husband was send out evites to the bachelorette party. In contrast, Ted made customized cards for the bachelor party poker game and decorated table cards for the wedding. And that’s when Lily lays down some harsh truth—Robin has no girls. “Tall girl from work, mouth breather from coffee shop….” Robin hates women, and women hate Robin.

Barney takes advantage of Ted’s dedication to being Best Man to send him on increasing ridiculous missions, including taking care of the doves for the ceremony. In the interim, Billy Zabka from The Karate Kid stands in as the best man for the bachelor party. Why is Tim Gunn also at the poker game? This is all because Ted broke The Bro Code by holding hands with Robin. The Bro Code traces its lineage back to Broses himself, who declared “Bros Before Hoes.” Oh, what? Barney slept with Ted’s mom? That’s gotta be a breach of The Bro Code, and a million times worse than holding hands with a fiancé. 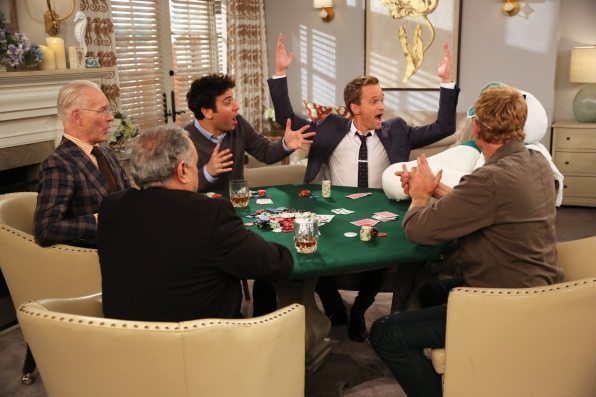 Lily tries to teach Robin how to make female friends, but it’s a difficult task because she’s just not a girl’s girl. Luckily there’s another non-hugging girl at the bar and they bond over hockey. Fearing for her friendship, Lily chases her off. But that’s okay, because she’s Robin’s psycho.

Marshall interprets The Bro Code to mean that if a bro holds another bro’s fiancée’s hand and it’s weird, then it’s a violation of The Bro Code. But since Ted and Robin are friends, it’s only weird if holding hands with any friend would be weird. So Ted and Barney hold hands on a beach to figure out if it’s weird or not. For some reason Ted admits to Barney that sometimes he still has feelings for Robin. So he swears on The Bro Code that he will learn to move on and live with it, and they all go back to playing poker with Tim Gunn and that guy from The Karate Kid.