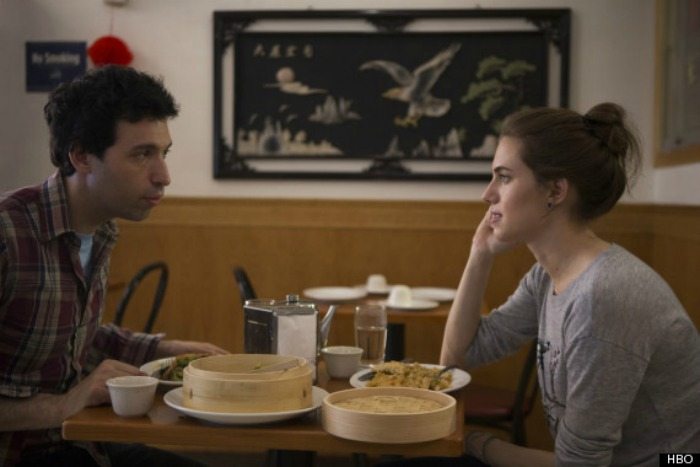 Hannah is working in the coffee shop, screwing up orders and quitting her job. Someone saw something that she wrote and gave her a staff writing gig at GQ magazine. Ray knows that nobody would ever hire her to write a real article, so it must be an advertorial. Which it is, because it’s sponsored by Neiman Marcus. Also, newsflash! Writing one (sponsored) article per issue does not pay the bills such that a person who is a writer anywhere other than the television can quit their day job. Or their second day job. And it definitely does not get you a cubicle in an office at a magazine. In reality, it’s a freelance writing gig and it pays reasonably well, if you bang out enough of them per month. But whatever.

Ray calls Marnie to “check in” with her and make sure none of the sex stuff ruins their non-friendship. She is aloof and demands that he put on a show of actually caring about her, which he does because he’s the last good guy on the planet.

Hannah doesn’t know what to do in her new cubicle, so she sits around doing not much of anything until an oddly dressed young man stops by to show her the ropes. She learns that advertorial writers are not the same as editorial writers, which burst her bubble…until she hears about the snack room, which is filled with delicious free food. Here’s another reality check—the advertorial writing “staff” (which, as discussed above, does not exist) does not get free food. Ever. If you’re lucky, the publication you work at has a decent cafeteria with reasonably priced soup. But what they don’t have are free Sun Chips, Slim Jims, and Orangina. Yeah. The water fountain is around the corner and to your left, toots.

One day into her new job and Hannah is already neck deep in office politics, with one coworker hating her and the other trying to get her to be his wingwoman. When she gets home, she shows Adam the bag full of snacks she “acquired” from the office and asks how his day went. He blew an acting audition because he doesn’t want an acting job so much as the challenge of reading emotional cues from strangers under a high-pressure situation. I think Hannah just realized he’s a loser.

Ray stops by Marnie’s apartment with vegan muffins to watch some shitty television and get to know her a little bit better. Welcome to the Real Housewives Of Shoot My Brains Outville, Ray. Then, they have very awkward sex followed by a very awkward lunch. These two just do not mesh at all, but neither one of them have anyone else to have lunch with so more dumplings, please!

The next day, Hannah’s coworker Kevin (the one who hates her), tells her that it’s her face he doesn’t like. She then insults the remainder of her coworkers by telling them that she’s a writer-writer, and not whatever it is they are, and that doesn’t go over so good because they’re all writer-writers. And they no longer write-write because they have cushy corporate gigs. She goes into the bathroom and sticks her head under the faucet. Then, she meets with her new boss, Janice. “I don’t want to be here in ten years?” And…she’s fired. And…five seconds later she asks for her job back. And…either work to pay the bills, or work to one day hope to maybe possibly pay the bills if only someone would take the time to actually read the manuscript you sent them instead of tossing it in the “bad” pile. You know, the one that sits there on the desk until the assistant carts it away and returns it to you with a form letter? That pile.

Anyway, Adam gets a callback for an audition because he totally didn’t care about getting the part. Apparently Hannah doesn’t care either, because she falls asleep on the couch while Adam celebrates his very small victory.

Next week, the girls go to a summer house. Sure, why not.