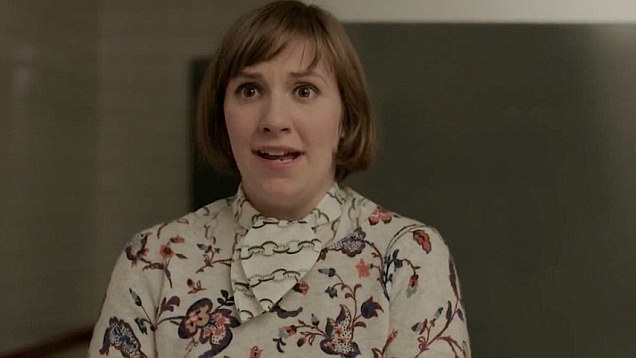 Golden Globe loser and human rumpus room Lena Dunham is back with her fourth season of Girls. The theme of this season is brought to us by Frank Sinatra:

If I can make it there, I’m gonna make it anywhere.
And if I can’t, I’ll just go to grad school.

College is four years in the rearview mirror, and in that time Hannah has accomplished…nothing. Other than quitting all the jobs. So it’s off to grad school to delay adulthood for another few years. Her on-again boyfriend, Adam, sums it up by noting that Hannah is “taking a next step in a series of random steps.”

The other three yahoos aren’t faring much better. Marni’s having kitchen sex, and Shoshanna is finally getting her diploma from NYU. Wait — that’s [does math] eight years of college?! At $25,000 per semester in tuition (without even talking about room and board), that’s [more math] $400,000 to graduate with no discernible skills! Ugh, parents. Why do you enable? And that other one, Jessa. She’s getting the boot from the elderly artist’s daughter who is the only twenty-something in the confines of this television show with any sort of sense. Also, Jessa seems to have lost her accent. Can that happen?

Oh look, that musician who was screwing Marni in the kitchen is still dating the prettier girl. I can’t tell if everyone is gathered for a going away party for Hannah, or a concert by Marni. Hmm. There are balloons, so I’m going with party. Nope. It’s just the worst jazz brunch in the world. Marni storms off the stage when she realizes that people are paying more attention to their egg white omelets than her braying. Which pretty much sums up this generation.

TOTALLY UNREALISTIC APARTMENT MOMENT: Hannah is moving out of the very large two bedroom apartment she shares with Adam, so…he’s taking over the apartment. Because struggling actors are known for their square footage, and landlords are totally okay with tenants who have no steady income.

Anyway, Hannah’s parents arrive at what is now Adam’s apartment to drive Hannah to grad school. As if anyone thought Hannah could relocate on her own.

Next week, Hannah drops wisdom bombs on her younger classmates.