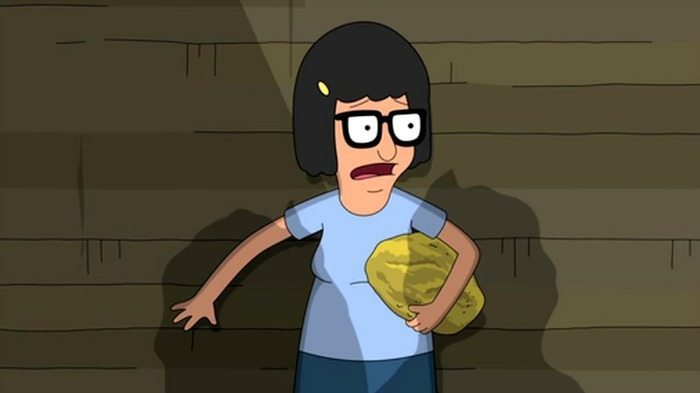 The kids are playing underneath the pier, where all of the good debris washes ashore. Louise calls dibs on all hook hands and peg legs just in time for Gene to find something that smells amazing, like a boy’s locker room in spring time.

The smelly lump is called ambergris, and is basically something pooped out by a whale. It’s used in the production of high-end perfume, which is why it smelled gross-great. They look it up and see that a lump is worth $30,000 and retrieve it from her parents’ bedroom. But it is illegal to sell ambergris because whales are endangered. After a few slaps across the faces from Louise, they’re selling it anyhow.

Gene tries to eat the lump because the Internet says it’s edible and Gene is like a goat. So now Louise is on patrol for Gene’s nibbling and Tina’s confessing. In order to sell their lump, the kids need help from Mickey the carnie. He negotiates a ten percent finder’s fee which will help him buy his monkey barn.

Louise sleeps with one eye open, protecting the ambergris with the skill of a psychopath and the passion of an Ancient Roman. After one sleepless night, Mickey found someone at Wonder Warf to buy the ambergris. It’s the fried dough guy, who is called The Nose. He can verify the ambergris and, if it’s authentic, buy it on the spot. Louise calls a kid’s meeting and they really need a conference room. Louise wants to cut Mickey out of the loop since he already gave them all of the information they need. Risky move, Louise.

To keep the ambergris safe, she tapes it to her back like in the movies. At this point ,her eye is twitching from lack of sleep. She leaves the house like a girl with a hunch on her back and is going to come back like a girl with a whole lotta money. Hump Back Wacky Eye talks to The Nose. She passes him a bit of ambergris. It’s finely aged. And he gives her twelve dollars. She’s small and twitchy, and he’s big and wiley. Luckily, she has no ambergris on her back because Tina taped a cantaloupe and dirty socks to her back instead. Just in case.

Tina and Gene bring the lump to Mickey who wants to use the money to buy a tank to rob a bank. To stop this travesty, Tina threatens to throw the ambergris in the water. But it floats, so that turns out to be a very bad idea. Louise, Mickey, and the Nose corner Tina. She panics and chucks the lump into the dough fryer. There goes the ambergris, and the money.