Reprinted with permission from www. survivingcollege.com
Ryan Lochte gives his buddy a challenge to eat fifty chicken wings in under thirty minutes. Sadly, this is something that I have seen men attempt before, and it’s never pretty. Because this is the Lochterage and they are nothing if not determined to complete pointless tasks, the fifty chicken wings are consumed within the required timeframe.

We are treated to shots of Ryan in the pool, which are few and fare between on this show. He’s going ot jump of of the 10 metre diving board which is really high.

Ryan invites his family over for lunch. This requires his mother to clean out all of the rotten food from his refrigerator, which I had just assumed was Gene’s job. The entire Lochte family is getting ready for a photo shoot. His sweet mother is under the impression that “the whole world” is going to see these photos, even though the number of people interested in Ryan Lochte gets exponentially smaller with every episode. 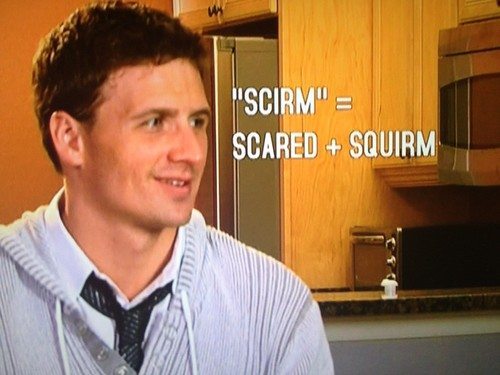 The Lochterage takes a break from protecting Ryan Lochte from imminent harm to play some paintball. Gene places a bet—if his team wins, he gets to shoot Ryan in the ass, and if Ryan’s team wins, he gets to shoot Gene in the ass. The thing is, Ryan can shoot Gene in the ass anytime he wants just by saying, “Gene, turn around, I want to shoot you in the ass.” But whatever, we’ll pretend like Gene has any kind of power over Ryan. There’s talk of broken guns, and someone is squealing like a girl. Gene’s team eventually wins, and he leaves quite the welt on Ryan’s shapely tuchus.

After Ryan’s dog pees on Devon’s bed (don’t ask), Ryan takes Devon to the mall to buy him an outfit for the photo shoot. He picks out a pair of jeans for his brother that will not constrict his manly region. Devon does a bunch of lunges to test out the jeans and decides that shorts are his best option. The women in Ryan’s family are practically hyperventilating over the photo shoot.  It’s almost like they haven’t had a camera shoved in their faces for the past few months. Ryan suggests they do a bunch of shots to loosen up, because alcohol is always a solution.

Ryan Lochte was fairly quiet this week, requiring viewers to read his mind along with his mouth:

Ryan v-chats with his fake girlfriend, Jaime, on a regular basis. They’ve been having a long-distance semi-relationship for three years. Finally, they decide that they need to decide what to do.  Later that night, Ryan takes the Lochterage out for sushi because they are just as special to him as every other woman he’s ever taken out on a date. In the middle of the meal, Ryan gets a fake phone call from his fake girlfriend. No really, I’m not kidding. Look at the phone—that’s the “search” feature, not an incoming call. Ryan then fake takes the call, for real walks out of the restaurant, and for real tells the camera crew that they can’t film his fake phone call from his fake girlfriend.

When he returns to the restaurant in his bright green pants, he tells the Lochterage that it’s over. “Truth is that, it was the last of me and Jaime.” Huh. Maybe she was only scheduled to appear in three episodes before going back to Wee Britain. But Ryan is easily distracted, and is soon consumed with the idea of playing Batman.

On the next episode: ESPN has a really bad idea and asks Ryan to recreate the Nirvana “Nevermind” album cover.