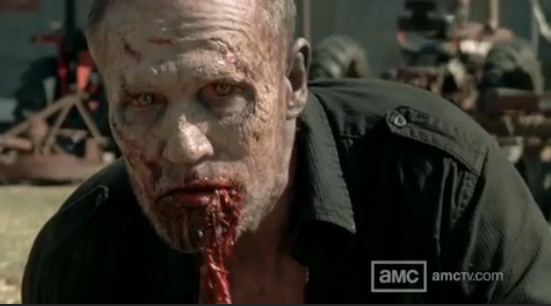 As if this season of The Walking Dead wasn’t boring enough, tonight’s episode was all about heart-to-hearts. Talking. Just two people, talking. There was Merle and Poor Man’s Jamie Lee Curtis, Daryl (who has sort of a weird boy-band-meets-Bowie haircut happening all of a sudden) and Glenn, then Merle and Daryl with a sappy “I just want my brother back,” and a prayer session between Hershel, his daughters, and the same God who created zombies. We also get a mercifully short talk between Rick and Lori, and oh! Glenn has a talk with Hershel where he asks for Maggie’s hand in marriage.

Speaking of things that are stupid, Michonne falls for the old “we have to secure the borders” trick and wanders around the prison alone with Merle. He easily takes her down (along with a half dozen walkers) even though Michonne would never, ever make such a rookie mistake.

To make it even more ridiculous, Merle somehow drags an unconscious Michonne out of the prison without anyone noticing. Once she wakes up, they’re on the road to Woodbury so that he can turn her over to The Governor.

They arrive at a motel where Merle breaks into a car to hot wire it for the rest of the trip. Unfortunately, he sets off a car alarm or, as they are known in the zombie apocalypse, the dinner bell. Merle suddenly becomes the most careless human on the planet and doesn’t realize his mistake until he is neck deep in zombies. Miraculously, he gets the car moving and the unlikely pair head off to Woodbury.

The most unintentionally funny part of the show is Glenn shopping for a wedding ring, which involves scouring the prison yard for zombie fingers. A diamond is forever!

After more talking than we’ve gotten out of Michonne this whole season, Merle gives Michonne her sword back and lets her out on the side of the road. She runs into Daryl because hey, it’s a small world, and explains that Merle let her go. He then runs off after his brother.

Merle is drinking the world’s last bottle of brown liquor in his newly acquired car with the music blasting, presumably to attract zombies but maybe because he just really likes that song. He leads the zombies to Woodbury, Pied Piper-style. Merle does a barrel roll out of the car right in front of the gate and heads into one of Woodbury’s conveniently spooky barns. The guards hear the ruckus and go on a zombie shooting spree while Merle picks them off one by one (with a little help from the zombies). I find it so interesting that all of the zombies are dressed in somber greens and grays, as if nobody ever died in a fuchsia ball gown.

The Governor finds Merle in the spooky barn and kicks the crap out of him…and did he just bite off Merle’s fingers? Merle gets in a few good jabs and stabs in before The Governor shoots him in the chest. Goodbye, Merle.

Family meeting at the prison! Rick explains how The Governor offered to leave them alone in exchange for Michonne, and how he was going to do that to keep them safe. But, he conveniently changed his mind after he sent Michonne off with Merle so it’s probably too late but it’s not Rick’s fault because he’s sorry so don’t blame him, okay? Rick steps down as leader while he’s making a speech to the group, so take it with a grain of salt. Oh hey! Here’s Michonne! What great timing.

Over in Crazytown, Daryl finds a blood and guts buffet, including his zombie brother chomping on a carcass. Zombie Merle ambles towards his crying brother and receives a boatload of pent up anger in the form of stab wounds to the face. Goodbye, zombie Merle.

So, maybe next week we’ll get this whole war thing we’ve been hearing so much about? Sort of like last season when we were waiting for everyone to leave the farm for, like, seven episodes.