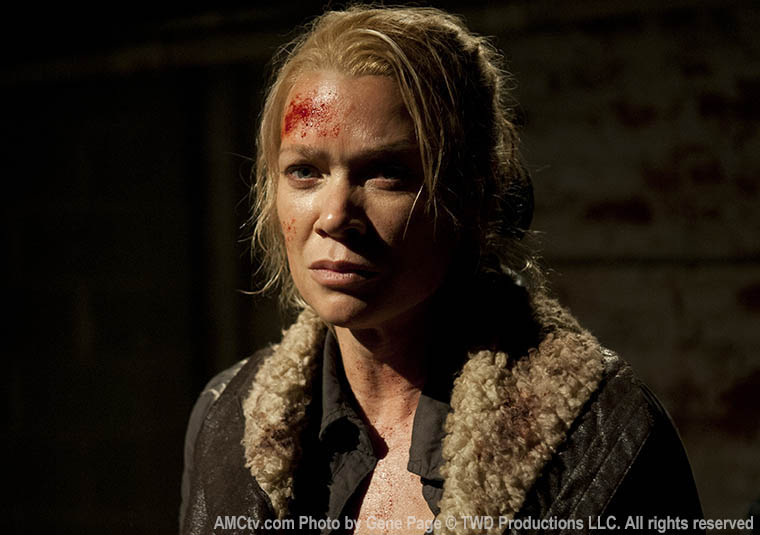 The episode begins with the Governor beating the crap out of Milton in an effort to get him to nut up. Blondie is still chained to a bad kind of chair with a shmear of too-neat-and-too-bright-to-be-real blood on her forehead. The Governor orders Milton to kill Blondie, but instead of carrying out those very specific and simple orders, Milton turns the knife on the Governor. Milton is too slow and feeble and gets a knife to the belly. Now the Governor can lock Milton in the bad chair room with Blondie and wait for him to die, turn into a zombie, and rip Blondie to pieces. Easy peasy, no need to worry that she might escape, or Milton might live, or someone might rescue her….

Over at the prison-themed bed and breakfast, everyone’s packing up their stuff to make a run for it. Carl, who is now twenty-seven, finds his father’s old sheriff’s badge. The camera lingers on it in a meaningful way, and I’m sure if the sheriff’s badge could speak it would give Carl a long, drawn-out lecture about responsibility. I love that Michonne is carrying her crap in a milk crate, like she’s moving out of her freshman year dorm. Michonne forgives Rick for trying to send her to her death, and then thanks him for taking her in because all women are helpless and need saving. I liked her a lot more before she found her voice. Everyone piles into their surprisingly clean vehicles, except for Daryl who hops on his zombie-proof motorcycle.

Meanwhile, the Governor is getting everyone all revved up for battle. Tyrese and his wife whose name I never bothered to remember because women are useless in the zombie apocalypse say that their fight is against the biters so they’re staying behind to defend the women, children, and the elderly.

To the war we’ve been promised all season! The Governor takes his caravan and storms an empty prison with machine guns and rocket launchers and all sorts of heavy duty equipment which is just about the dumbest thing I’ve ever seen. How about sending someone in to confirm Team Rick’s location? Or at least make sure someone is still inside the prison? Once inside, Team Woodbury finds the prison cleared out of everything useful…except a book that I assume is some sort of bible, opened to a highlighted passage that reads:

Very, very profound stuff, but it does not deter the Governor who decides to move his crew deeper inside of the prison.

Milton tells Blondie that in the tussle, he dropped some tools behind her that she can probably reach with her foot and escape. He tells her to stab him in the head when she gets free so that he can’t turn. But Blondie decides to waste precious time by talking to Milton about things that are much less important than escaping from the bad chair, and Milton dies before Blondie escapes. I guess adrenaline kicks in because Blondie immediately frees her hands to fight Zombie Milton.

It turns out that Team Rick was hiding, waiting to ambush Team Woodbury. They scare Team Woodbury off a little too easily, considering how heavily armed the Governor’s crew was when they entered the prison. Carl even gets a kill in when an escapee in the woods won’t drop his weapon fast enough for the kid’s liking.

Team Rick wants to take the fight back to Woodbury, and we get our first glimpse of Li’l Asskicker in about three episodes. She is surprisingly quiet considering she’s an infant in the midst of gunfire. Hershel explains to Rick that Carl didn’t actually have to shoot the kid who was running through the woods, but rather “he gunned that kid down.” But Hershel doesn’t have a leg to stand on because it’s the goddamned zombie apocalypse and Team Rick has been shooting fish in a barrel all day long. Disciplining Carl for shooting someone is a little too “I learned it from watching you!” anti-drug PSA, so Rick skips the lecture and just moves on with his wretched life.

During Team Woodbury’s retreat, the Governor pulls the caravan over and shoots his own people for being frightened little girls. Despite being heavily armed, nobody thinks to shoot the Governor. Everyone is dead except that guy who made nice with Daryl during the peace talks and some other guy. Then, either as a sign of mercy or to save his own ass, the Governor starts to shoot all of his victims in the head so that they won’t turn. He runs out of bullets right before shooting a woman who was playing dead (because in The Walking Dead, women are scared and must hide instead of fight), then piles his diminished crew in a car and drives off.

Daryl, Rick, and Michonne are off to Woodbury. When they happen upon the Governor’s massacre, they’re a tad confused. Luckily there’s Karen, the one woman he left alive, to explain things. When they get to Woodbury, she tells Tyrese that the Governor is a killer (duh) and Rick’s crew saved her (eye roll). They then go in search of Blondie because…why? Oh right, because women need saving on The Walking Dead. They find Milton dead, and Blondie with a zombie bite wound. Yes! Pours a glass of Champagne….We finally get rid of her! Michonne decides to stay with her in the room while everyone else waits on the other side of the door for a gunshot. But, dammit, we don’t actually get to see Blondie’s dead body, so there’s still a chance that we will be stuck with her in Season Four.

A big old caravan filled with Woodbury’s decrepit elderly and a few children drives into the prison, so I guess we’re also stuck with the prison for Season Four.   The only person who seems happy about the reinforcements is Hershel, who now has a peer group.

Wow. So, yeah. That was far less satisfying than the flaming barn zombies from last season’s finale, and it leaves us in exactly the same place—Rick’s crew in the prison fighting the Governor’s crew in Woodbury. Sigh. I’ll see you all again in October.