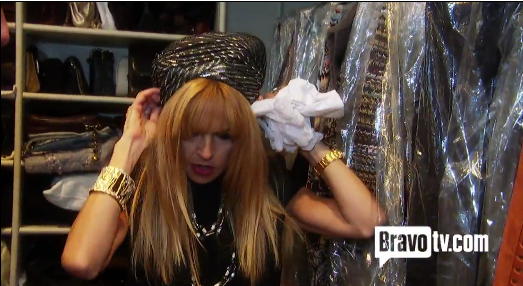 It’s morning with Mr. and Mrs. Zoe, and their bedroom is about as staged as a high school production of Hello, Dolly! The fun starts when Roger tells Rachel that she’s too old to bake another baby, and Rachel tells Roger to suck it. Ah, true love.

Did you know that Rachel Zoe wrote a book? No, you didn’t. But only because her picture wasn’t on the cover. So with her new book, the cover will be all about Rachel. Even though Rachel Zoe hates being in front of the camera. Hates it. “No, stop, don’t point that camera at me does my hair look good and can we maybe try one with this hat?”

Eew! Rachel Zoe in a backless dress is vomit-inducing. You should not be able to see someone’s rib cage poking out of their spine. Speaking of her body, Rachel Zoe’s body has an aversion to the color pink. And, the mouth part of her body divulged the following insight:

Rachel’s friend, William, stops by the photo shoot with caviar. He teaches us that “glamouflage” is when you choose your wardrobe because it keeps you strong and secure. Meanwhile, the stylists and helpers are secretly mocking whatever medical condition causes Rachel Zoe to say “ah mah gaht, ah mah gaht.” And, we learn that Roger gets turned on when Rachel is in leggings and a tank top. I’m sorry, but if I had to picture that, then you had to picture it, too.

Rachel’s baby’s outfits are in the Gucci garment bag, because that is where everyone keeps their baby’s clothes. Oh look, it’s a baby Gucci tuxedo. I can’t wait until that child grows up and joins the Peace Corps because he is tortured by the number of starving children that could have been fed for the price of that tiny formal wear.

Roger goes shopping for the poor child, and buys him normal hipster baby clothes, including a tiny little Beastie Boys t-shirts and track pants. Good for him, taking charge. This is not going to end well. “I don’t understand. What is he wearing?” Rachel thinks Roger doesn’t understand the importance of being impeccably dressed at 20-months of age. And I mean, really. Is there anything more important?

Next week, literally more of the same.