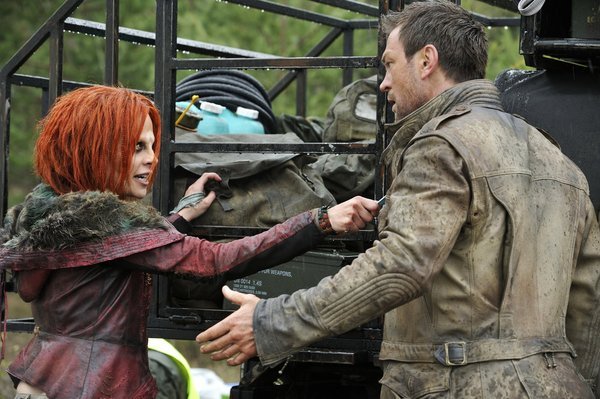 Lindsay, I mean Irisa and Dick, I mean Jeb, mix it up

I am a sucker for the SyFy network. For years they have satisfied my barely-concealed fangirl with shows like Stargate, Stargate Atlantis, Battlestar Galactica, etc. etc. etc. I do love me a good alien.

So here we are with their newest contribution to the fine tradition of dystopian Earth 2.0 epics with the show Defiance. I’m going to pour myself a nice glass of Beaujolais (not nouveau, thankyouverymuch, some nice Fleurie!) and see where this takes me.

We seem to be decades past an invasion and terra-forming (why does SyFy love terra-forming so?) The Antarctic is now a tropical paradise! Cities have fallen! Spaceships fall out of the sky on a regular basis, to be scavenged for parts, which brings us to….

Our lead protagonist Jeb Nolan – a gruff, Han Solo type played by the same fine actor who brought us Richard Burton in Liz & Dick! You remember that fine piece of work, right? And here he is accompanied by another orange haired girl whose forehead looks like it has been over-injected by botox. Nope, no Lindsay Lohan, but his adopted alien daughter, Irisa.

This brings me to my biggest SyFy pet peeve — biped aliens who resemble humans except for cosmetic facial differences that often make them strangely more attractive…. except in this case many of the resident aliens resemble an albino Brent Spiner (remember Data from STtNG?). Ew. Not attractive.

Jeb and Irisa, on the run from Spirit Riders (hello! Mad Max! Your villains drifted over here!) end up in the town formerly known as St. Louis, now known as Defiance. One Madame (shades of Firefly) and hot Mayor (sister of the Madame) later, he is Lawkeeper in town and charged with keepin’ the peace.

I miss Battlestar Galactica, Stargate and Firefly enough to give this show a chance and SyFy does specialize in finding a new spin to put on the old tropes… but it does feel a bit like they’ve taken every successful show they’ve had, put them in a blender and spit this bad boy out. If we could get some more hunky shirtless scenes, it would go a lot further in capturing my imagination.

In any case, I am hoping that, like the beaujolais the show has some good tartness, but a longer finish.

Note: Apparently there is some sort of online game that ties into it, but I’d have to put down my glass of wine to check that out and that ain’t happening.

One thought on “Defiance: So Terrible, It Has Albinos”