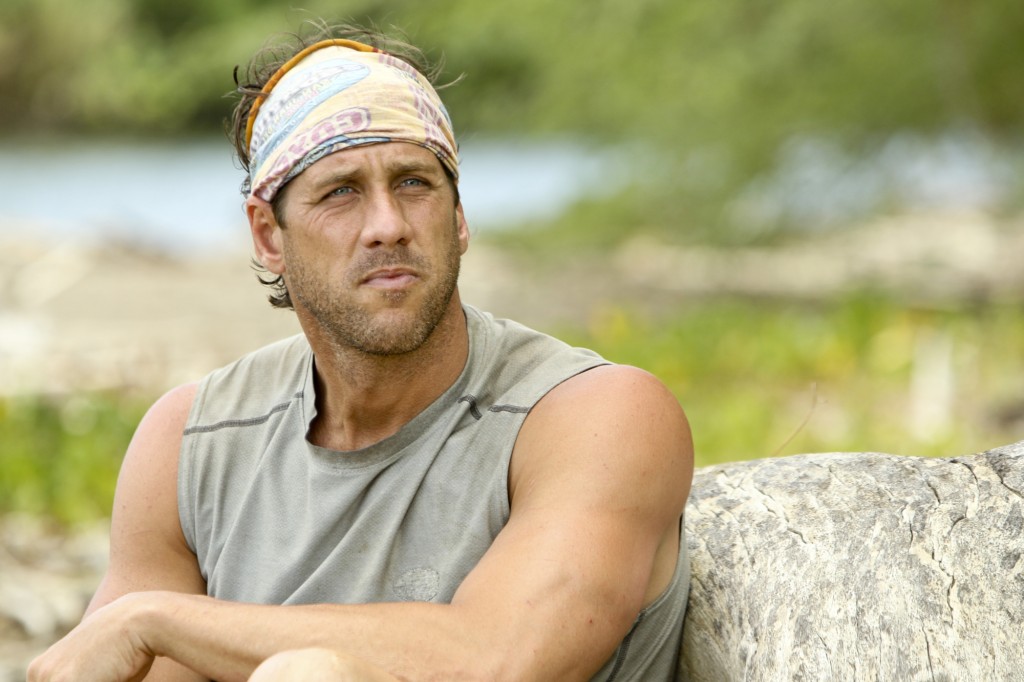 So what’s new? Well, Reed can stretch his leg over his head and some other dude likes to bench press driftwood. Not to be outdone, this other guy does push-ups off of a log. Oh, and the very important to the point of being essential fire making flint is missing.

At the Reward Challenge, it’s a patented Loved Ones Showdown with a ball balancing obstacle course and bonus skee ball. I guess that’s like a Showcase Showdown, only the reward is fishing gear and a bit of food instead of a dinette set and a refrigerator. Horrible Person John Rocker and his “model” girlfriend, Julie, do the challenge and he either lets her win, or he’s ironically bad with balls. Instead of congratulating her, he grouses that “I just got beat by a girl.” Julie, honey, you can probably do a bit better than this loser. Anyway, meathead heads off to Exile Island with Jeremy from the other tribe.

Then, the blue team asks Jeff Probst if they can trade the beans from their reward for flint. Jeff notes the irony of having two firemen in their tribe. And, he’s a shrewd negotiator and counters with an offer of flint for the beans plus all of their fishing gear. The tribe reluctantly agrees. I’m guessing they’re going to keep a close eye on that new flint.

Dammit, terrible person John Rocker finds an Immunity Idol. He hatches some bizarre scheme where he tries to save Val because of a promise he made to Jeremy at Exile Island wherein Jeremy would keep Julie safe and John would keep Val safe. Anyway, the vote is being split between Val and Baylor. But later on it is noticed that John and Val took a little walk on the beach together, so who knows.

Next week, everyone hears all about John Rocker’s past and it makes Hulk smashy angry.