Diapers and samosas. Or was it mimosas?  Something from a million years ago at a bar, and how Marshall and Robin are so platonic that they wouldn’t hook up if everyone else’s lives depends on it, and Marshall tells Ted that Robin is still in love with him. Wait, isn’t she marrying Barney? The guy who just accepted a challenge to get a girl’s number while talking like a dolphin? I feel like maybe I stepped into this show about a decade too late. Oh good, Marshall is just trying to win a bet with Lily.

Barney’s next challenge is to pick up a girl wearing a garbage bag…and he can’t use the letter “e”. That works, so Robin plays interference. She tells a hot redhead (who I think might’ve been on Rock Of Love) at the bar that she is Ryan Gosling’s assistant he sent her over to tell the redhead to stay put and not talk to any other guys. Then, Robin challenges Barney to get the redhead’s number. So Barney tells the hot redhead that he is Ryan Gosling and a method actor who had to get plastic surgery for a role. And he gets her number. 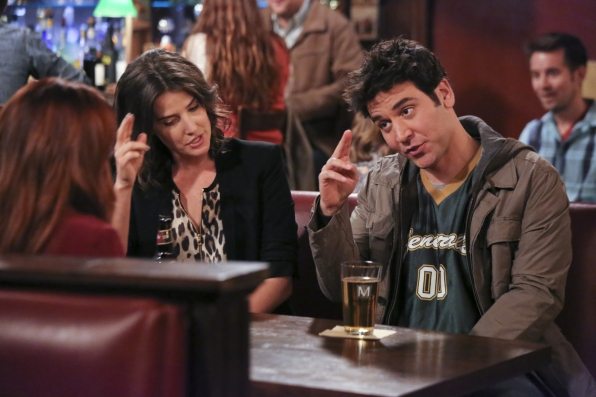 Ted gets a call from Walter White who is an architect in Chicago and wants to hire Ted for something-or-other. Ted agrees to think about it, but I’m pretty sure he’s just humoring him. Ted calls back and declines the offer.

Barney’s next challenge is to pick up diapers from the grocery and a samosa from the Indian place while picking up a girl…who I think might be the elusive mother. She’s buying a comb, sees through his crap, and gives him some truth, but not her number. Barney realizes that he should stop messing around and be with Robin and writes her name in a book, and that’s that.