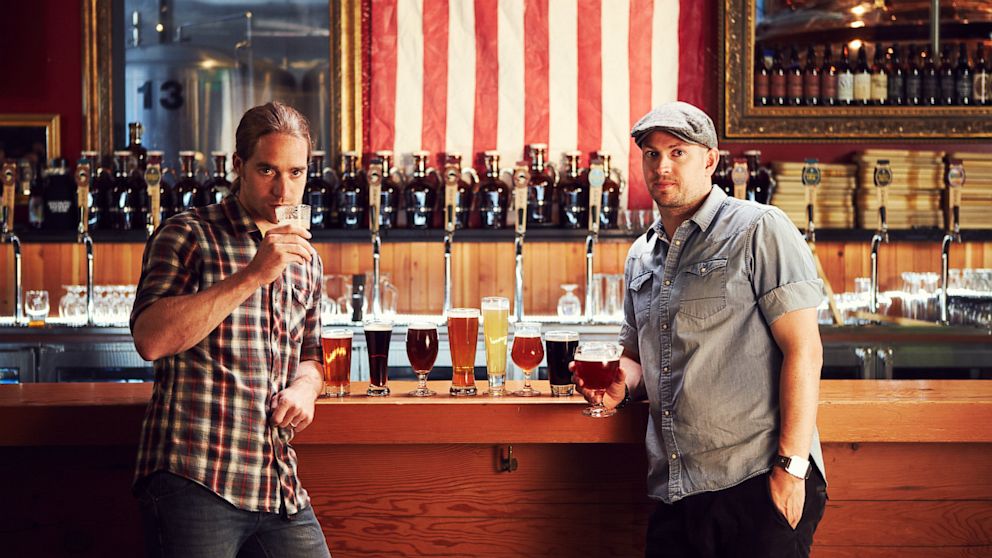 Welcome to the second season of Brew Dogs, where two Scottish men I can barely understand travel around America, brewing bizarre and bold versions of local beer. The first city on their list is Durham, North Carolina.

Martin sports a ponytail, which is an unfortunate fashion choice for a decade that does not begin with a nine. He explains that The Sooooth is not really The Sooooth. I think he means “south?” He suggests to James, who wears a cap no matter the weather, that it only makes sense to create the most caloric beer of all time in a town known for its southern barbecue. Uh…sure, cap guy.

Here’s where we get a beer lesson. Specific gravity equals density of something and the density of something else, which basically measures the amount of sugar in a beer. So, the more sugar means the more calories. And beer’s calories are totally useless, hence the beer gut. Anyway, ponytail guy is intrigued by the idea of adding North Carolina maple syrup to the beer, but cap guy is enticed by persimmons. Both ingredients are sweet, which would boost the calorie content.

James and Martin decide to burn calories while creating their beer to balance out the horror of their creation. This means combining beer with a spinning class. No, not kidding. Cap guy swaps out his hat for a sweatband as he spins, and ponytail guy looks like he’s ready for yoga. Plans are made, but thankfully no beer is brewed at the gym. Probably because sweat is low in calories.

Next is a visit to a maple syrup farm. The best thing I learned is that gravity does a lot of the work. Which, duh. But still, good to know. Then, it’s off to the sugar shack which is less sexy than one would expect. In the sugar shack, you can drink freshly boiled sap. Kind of cool, but also sweatier than a spin class. Did you know that a spoonful of maple syrup is 50 calories? That’s…a lot of calories, once you figure how many spoonfuls it takes to make a stack of pancakes delicious. Trust me, don’t do the math. It’s too depressing.

As if maple syrup isn’t enough, James and Martin decide to add delicious North Carolina bacon to their beer. They go straight for the fatty parts, which are by far the tastiest parts of most meat-based animals. Also, don’t forget about pie. Surely there’s a beer that can pair well with pie!? The first pie is apple and prune, which sounds surprisingly disgusting but the boys pair it with a craft beer nonetheless. Next is a pie that is either a southern chess pie, or a southern chest pie. It’s hard to tell, but big difference. Huge difference. The pastry shop owner is not pleased with the pairing, but too bad, lady. Finally, a lemon pie. For me, there’s nothing sadder than a lemon dessert except for a vegetable-based dessert. I don’t even care what their pairing might be, unless it drowns out the disappointing detergent flavoring.

Okay, so maple syrup and bacon has been obtained, and now it’s time to actually brew some beer. Make that mobile beer. It’s a trolley pub, requiring 10riders and well over an hour of peddling. And don’t forget the propane gas tank…. This is both way cool, and way stupid. But, calories are being burned as calories are being brewed, so mission accomplished?

They ride the beer bike for, like, forever. I assume they’re riding through Raleigh-Durham? Or maybe just around the block. It looks especially cold out, so ponytail guy turns into hat guy, and cap guy remains cap guy. Then, our old friend gravity takes over and siphons the golden brew into giant jugs. But how’s the gravity of the beer? It’s high, which means a lot of calories. It is deemed sweet, smoky, meaty, and bitter. Which…okay? I mean, is that a good thing for a beer? Luckily the local beer brewer brings a coffee pecan beer to drink.

But wait! They’re not done yet! The very best way to add calories to beer is to turn the beer into ice cream. A local ice cream shop is on hand to toss in a whole lot of milk, cream, sugar, eggs, and more maple syrup. After six minutes in a deep, deep freeze, Imperial Stout Ice Cream! Sadly, most of it ends up on ponytail guy’s head which is not cool, man. I’m not sure why they didn’t make a beer-and-ice-cream float. That is something I could get behind.

And what does Raleigh-Durham think of this beer bastardization? There’s a Tokyo beer with 525 calories per serving, and James and Martin’s beer has 633 so great big chants of YOU! ESS! EHH! erupt in the beer hall.

Next, St. Patrick’s Day in Chicago, which means a traditional green beer.