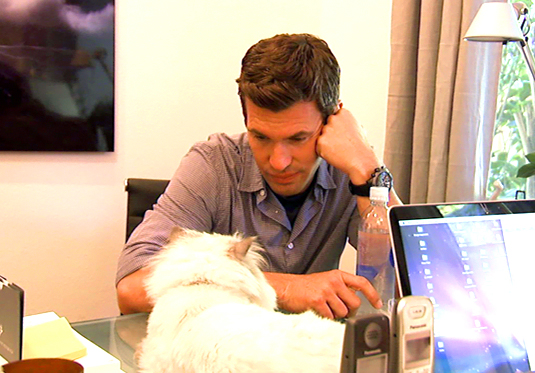 One of my most guilty television pleasures is Flipping Out, a reality television show about Jeff Lewis (the best/worst boss ever) and the people crazy enough to work for him. Houses get flipped, rooms get decorated in Jeff’s signature beige Generic Modern style, and I could go on and on about Jenny and Zoila and pretty little Gabe. But this isn’t about the people of Flipping Out. This is about the furry little beasts, the herd of cats and dogs whom Jeff loves and cares for better than anyone I have ever known. And it’s about one pet in particular: A cat named Monkey.

A big old pile of fur, Monkey has been to therapy, received acupuncture, swallowed pills, and he took it all in kitty stride. So when references to Monkey’s declining health became a minor plot point on the show, I knew it was not going to end well. I just didn’t know Bravo would be brave enough to actually show a beloved pet being put to sleep, which is exactly what it did. Beautifully, and respectfully.

If you’ve ever lost a pet and you watch this video clip, you will cry like a baby. If you’ve never had a pet and don’t understand what the big deal is because “it’s just a stupid cat,” sit your butt down and grab a hanky because you are about to have feelings about a walking dust mop.