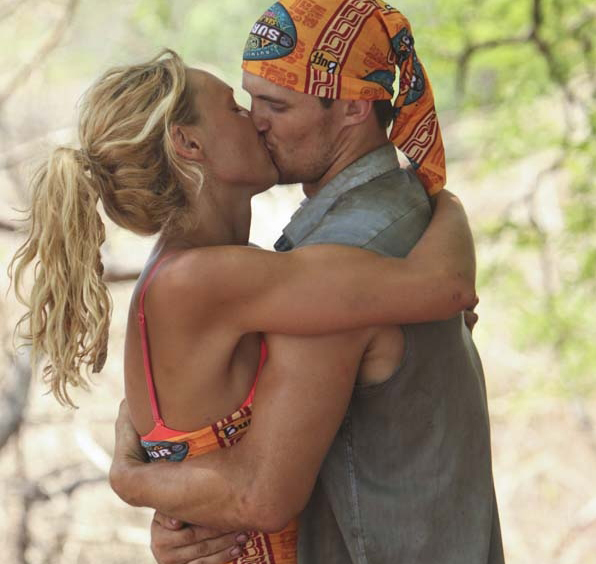 After Drew single-handedly threw the Immunity Challenge, earning him a spot on a flight back to wherever he came from, the tribe is elated. The orange team is shocked to see him gone, and Jeff is shocked that anyone is shocked because what do you know, orange tribe?

Kelly and her dad, Missy and her daughter, Josh and Reed, Jon and his girlfriend…there are three whole pairs of loved ones on the orange tribe, and one measly pair on the blue team. It’s too early to tell how this might shake up the game.

The food situation on the blue tribe is dismal. Wes suspects the former blue tribe’s chow downs is why they kept winning the challenges. Meanwhile, the new orange tribe is super duper excited about all of the food. Missy puts fives scoops of rice into the water. Dale tries to slow her roll, but There’s a ton of rice at this camp…that’s not how we did it over there, we made so much more than this!

What the orange tribe is not super excited about is Jacqueline and Jon’s excessive lovey doveying, which is gross because these people are all stinky and grubby and have not brushed their teeth in weeks. The other couples are far less lovey dovey since they are mother-daughter and father-daughter. But still, it’s way too gropey on this tribe.

Come on in guys! Look at you in your new buffs, one tribe with full bellies and the other with the tummy grumbles. The challenge is a digging up a bag and crawling through the mud to open a gate and shake sand bags loose that must be tossed onto wobbly platforms kind of thing.

Despite having eaten twelve pounds of rice, the orange team is useless. The blue team dominates the bag digging, mud crawling, and sand bag shaking portion of the game. Twenty blue sandbags fall out of a perch as the orange team scrambles through the mud. Blah blah blah, the blue team wins by an embarrassing amount and the orange tribe is headed to Tribal Council. Also, everyone is covered in mud and dirt.

But wait! The blue tribe wants to talk to Jeff. “We’re basically out of food….” Jeff says he will discuss it with them after he deals with the orange tribe at Tribal Council. What on earth could they have to trade? Shelter? Or…a loved one?

At the orange camp, two couples team up to get rid of Missy or Baylor. Then, one of the couples start speed dating Missy and Baylor. It’s all so weird, and I could barely tell these people apart when they were on their original tribes so now I’m just thoroughly confused.

Next week, Dale makes a fake Immunity Idol and Jeff cuts the blue tribe a deal.

One thought on “Survivor Ep. 5: Drop Your Buffs”