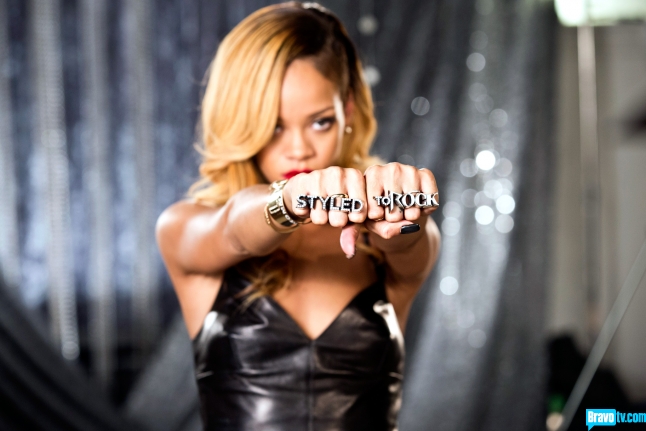 Rihanna comes out for the sole purpose of making the contestants cry. They brought her offerings of one design and, to be polite, she glances in the fabric’s direction. There’s a truly ugly black and yellow dress with gold spider leggy things, and a surprisingly stunning dress made out of orange danger netting. Zebra prints, polka dots, a pink prom dress, lots of leather, a designer with only one hand….it’s a little bit of everything.

Rihanna has limited words consisting of “rock,” “sick,” and “bad ass,” so her critiques are not very helpful. Thankfully, she puts the designers in the hands of three mentors: Pharrell Williams, model Erin Wasson, and Rihanna’s stylist Mel Ottenberg. Instead of a fashion spread in Elle Magazine or Marie Claire or wherever Nina Garcia works these days, the winners get a fashion spread in Glamour Magazine. They will also get a chance to work on Rihanna’s design team which kind of sounds like an unpaid internship. Oh, and a hundred thousand dollars.

The designers are sent to their new home, which is a loft above their workspaces. To make it incredibly uncomfortable (but easy to film), there are no walls. And the kitchen is filled with booze.

When they enter the workroom the next morning, the designers receive their first challenge, which is to make a piece inspired by their muse in less than 48 hours. Sketching sketching sketching, Janet Jackson, Nicki Minaj, Beyonce for a man, Madonna, Bob Marley, Gwen Stefani, Katy Perry, Mariah Carey, Prince, and a fabric store that looks like Mood’s discount bin cousin.

Erin and Mel stop by and take a peek at the designs in progress and drop the bomb that the winning design will be showcased at the Grammy Museum (which I guess is a thing?). Erin explains that some of the designers are thinking too much and not really doing enough. And then, there’s a switch. There’s a gatekeeper before you get to the star. Those stylists might see dozens of looks, but only pull a few to show the artist. And Erin and Mel are those gatekeepers. Ahni, Dexter, Autumn, Laura, Andre, and Jordan get called to the front. They have made the pull, are safe from elimination, and are designing to win the challenge. Everyone else is at risk of elimination. There will be two showcases, and the curator from the Grammy Museum will only see the looks in the pull. Ha. I love watching dreams crushed.

Totally unrelated but the funniest thing I heard all episode is, “I am studding the crotch of my panty.”

Instead of a runway, there’s just a room with Erin, Mel, and Pharrell sitting in what look like very uncomfortable chairs next to the curator from the Grammy Museum, Ali Steubner. She will decide which looks will be seen in the museum. First up is Ahni’s Nicki Minaj outfit and it is made from some crazy peacock patterned leather bodysuit with leather netting on the legs. Next is Andre’s Madonna-inspired dress, which is a luxurious gown made of lace and satin. Dexter’s Prince-inspired outfit doesn’t seem to reference Prince at all other than the purple and black color scheme. I don’t understand this look. Autumn’s Katy Perry outfit is black and sparkly and it utilizes Autumn’s signature zippers which are already so last year. Laura’s outfit inspired by Gwen Stefani is adorable. There are casual baggyish patterned pant with a leather halter top. Jordan’s Janet Jackson-inspired look is a little too plain. I get the concept with the 90s-style oversized jacket, but Pharrell doesn’t, so it’s dead in the water. 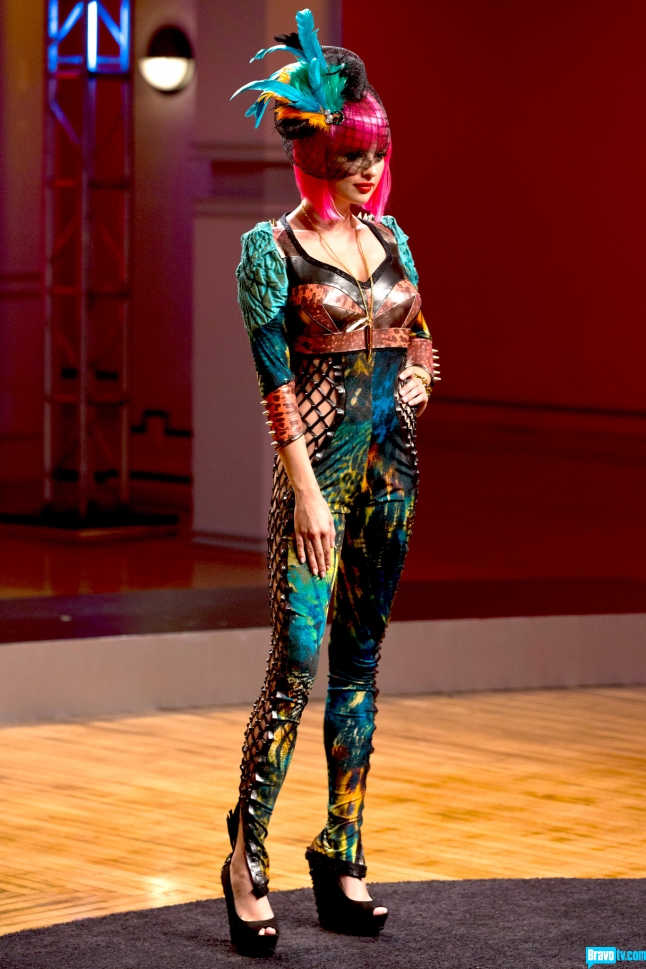 The top three looks are from Ahni, Autumn, and Laura. Someone let Ahni speak and she said, “It’s been a process of giving birth to a thought baby, and I really put so much of my brain juice into this one.” Ali gives the win to Ahni, whose look will be showcased at the Grammy Museum.

And now, for the losers. Ebony’s Lady Gaga outfit has a lot of plastic windows, but she failed to ventilate so her model is a disgusting sweaty mess. Kristie’s Cher gown is too plain and it’s not even finished to perfection. Keenan’s Beyonce For Men makes absolutely no sense. Adam’s Mariah Carey gown is “ratchet prom.” Cecillia’s Aaliya look has pant legs at two different lengths and the butt is Krazy Krotch. Adriana’s Bob Marley outfit is ambitious, but so poorly executed that it’s a bunched up mess. 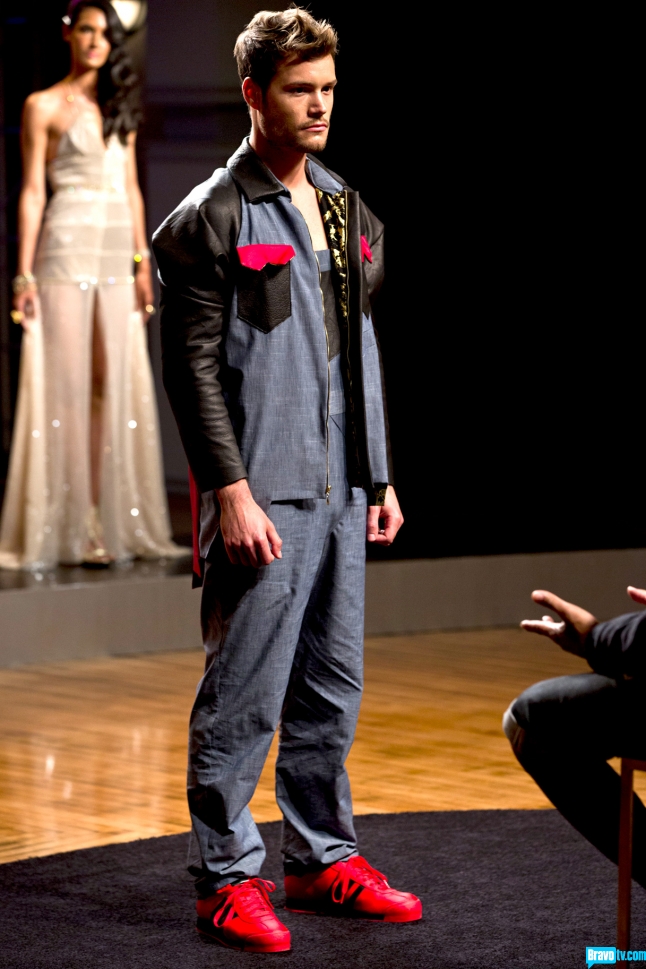 Two looks completely missed the mark—Adriana’s Bob Marley, and Keenan’s male Beyonce. The judges are struggling with Adriana’s embarrassingly bad execution. Pharrell recognizes Keenan’s talent and Adriana’s outfit was more like a rough sketch, and for some reason they send Keenan home.