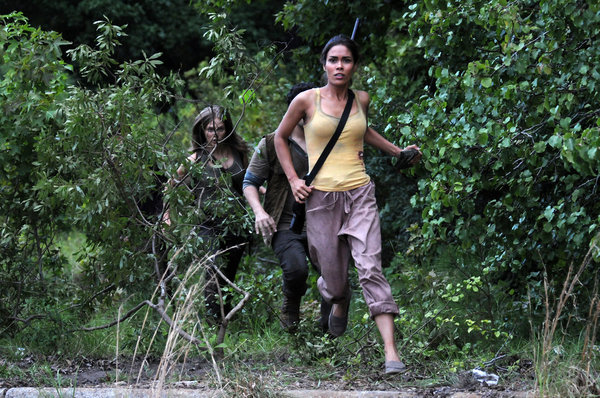 Okay, let’s try this again. Revolution is the show where all the lights go out and the world turns into a very special episode of Little House on the Prairie. The credits say that C. Thomas Howell is a guest star, but since I only remember him from his fine work in Soul Man and it’s unlikely that he will be wearing blackface on this show, I doubt that I will recognize him when I see him.

This week, we get a taste of the immediate aftermath of the lights going out. Charlie and Danny’s mother is still alive. I don’t know what her name is, but since she played Juliette on Lost, that’s what I’m calling her. Ben and Juliette loaded their kids into a little red wagon, tossed some food onto a luggage cart, and left their house behind. This is stupid. I would’ve gone for a shopping cart, or one of those giant bins NYU students are always using to move Ikea furniture in and out of their dorm rooms. Somewhere down the road a piece, Charlie gets held hostage by a vagrant, and Juliette shoots him in cold blood.

Fast forward to real time, where Charlie, Miles, Ben’s girlfriend, and the neighbor flee Chicago. Miles is looking for Nora, who he says is really good about blowing stuff up and can help get Danny back. She’s in Indiana, and it’ll take two weeks to walk there because Indiana is farther away than Chicago. Charlie goes with him, leaving Ben’s girlfriend and neighbor to fend for themselves. Kids these days.

Danny remains a prisoner of Gus from Breaking Bad, who believes in the militia because it’s the only order they’ve got left. We learn that guns are outlawed for everyone except the militia, and ‘murican flags are for burning. We meet Sebastian Monroe, the President of the Republic, General of the militia, and former buddy of Miles.

Now on their own, the neighbor shows Ben’s girlfriend the necklace. He says he has to take it to someone named Grace Bowman who, what a coincidence, is the woman with the computer who Danny ran into late week. The neighbor says that he thinks the power outage was man made, which means that it’s fixable. But will they find Grace in time? Of course not. Some guy named Randall gets to Grace first. She is able to type out a quick “Randall is here” on the computer screen before Randall bursts into the room with some sort of big ol’ Electric Poker Of No Good. We don’t find out what he does with it, but hopefully it’s nothing more than wiping out Grace’s electricity.

Meanwhile, Miles and Charlie stumble upon a chain gang of mostly beautiful white people in sexy yellow tank tops pulling a helicopter for General Monroe. In another big, huge, unbelievable coincidence, one of the members of the chain gang is Nora. With the flick of a wrist, Miles sets her free. She’s pissed at the rescue and claims to have gotten caught on purpose to get closer to the guns which she wants to steal. Charlie volunteers to help Nora steal the guns because Charlie wants to free the slaves. So Charlie wanders into the chain gang, claims that she got lost hunting, and shoots a gun that she has hidden in her jacket. Chaos ensues, people get stabbed, everyone is slicing and dicing, and there may have even been a bit of kung fu fighting. Turns out Nora wanted the guns because she joined The Rebels who are gonna take back these here United States of ‘murica.

Finally, we see Juliette alive and well. And not just living, but living the high life in a fancy house with fresh clothes and shiny hair and cups of tea. But oh, wait, no. Just like on Lost, Juliette is being held in luxurious captivity. General Monroe brings her news of her husband’s death and the capture of her son, Danny, and he demands to know what Ben knew about the lights going out.

And that’s it for this week. The show remains terrible-but-watchable, so let’s try this again next week, shall we?