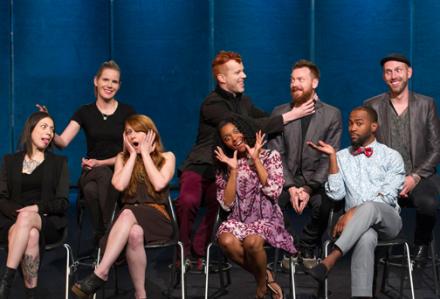 This week, Project Runway Superfans take over for a makeover. Tim Gunn is a good sport and gives everyone a charming tour of Parsons and the Project Runway runway. Then it’s a Tim Gunn Gather Round™ where he introduces the designers to their new stalkers! I mean clients!

The button bag pairs up the designers and the lunatics, and it’s a quick collaboration before a trip to Mood where Ken makes a terrible fabric choice. His Super Freak falls in love with a pea green shimmery wooly thing, and he buys it because he wants to make her happy or else it gets the hose again.

Anyway, the clients are ready for their makeovers and that leaves time for the designers to do their designing. Bradon is sewing an edgy suity thing, Dom is creating a sexy day dress out of a very unsexy fabric, Alexander is stitching a form-fitting suit, Alexandria seems to resent her clients’ existence, and Ken is under pressure which means there’s an explosion on the horizon.

Back at the hotel, Bradon and Alexander pack up their belongings so that they can move in with Ken and Justin since their other roommates got kicked off of the show. But Ken won’t even let them in the room because I’M IRONING. Everyone’s tired, everyone’s prickly, and Alexander throws the iron on the floor to get into the room. Ken freaks out, a producer tries to calm him down, and the next morning, Tim inexplicably defends Ken’s actions because somehow Alexander demonstrated bad behavior? I don’t understand any of this, and somehow Ken ends up with a private hotel room.

Cutting, pinning, sewing, and Dom’s dress is kind of ugly. Tim visits the workroom and starts with Justin. His client is a Mormon so the garment has to be modest so sleeves and below-the-knee. Tim is nervous about Alexander’ suit because he barely has a shell made. Alexandria’s outfit is looking frumpfest. Kate’s making a MILF costume. Bradon’s problem is his client is already pretty. Tim wants Ken to make his snot green dress fitted so that it doesn’t look like he’s hiding something, and Helen is fairly confident that she is going to be able to turn her duckling into a swan.

It’s the day of the runway show, and Ken realizes that his dress is too simple and the color is too hideous. But don’t worry, Ken. Kate’s outfit is even worse. Meanwhile, Alexander is not even close to finishing his suit, and Helen’s client is looking like the Queen of the Dungeons And Dragons Club. With ten minutes left, Alexander is still sewing a zipper and the hem isn’t, well, it isn’t hemmed.

I wonder if any of the Super Fans will pass out when they see Heidi Klum. We’ve already got a crier backstage because everybody’s dream is to be the real-sized woman on a Project Runway challenge. The judges are Zac Posen, Nina’s underling Zanna Roberts Rassi, fashion designer Erin Fetherston, and Heidi Klum. And Tim Gunn gets to watch.

Dom’s dress is the wrong dress for the wrong woman, and it’s a dress we’ve all seen on the sale rack at T.J. Maxx.

Kate’s top and leggings are awful, and that netting looks cheap and tacky.

Ken’s dress “looks like a couch from the 70s,” but it’s still sort of almost okay.

Alexandria’s skirt and jacket is blah wrapped in blech.

Helen’s navy blue gown is ready for the main event. I can’t stand Helen, but that is a hot dress.

Kate and Dom are safe and head back to the Waiting Pit. Justin talks about his Mormon modesty challenge and the cute and special signature he stitched along the entire front of the dress. The judges seem to love it, and it is a fairly nice look. Alexandria tries to explain why she made a dark and dowdy look. Heidi doesn’t like it at all because it’s not hip, modern, or youthful. Bradon presents his client who needs to put down the self-tanner. The judges are really into the vest but not so much the dress underneath. Ugh. Alexander. Zac immediately spots the unfinished construction, and he doesn’t want to hear any excuses. Also, the cut is weird and it’s just a poorly executed idea. Helen’s client looks so uncomfortable in her own skin. She wanted an Oscar red carpet gown, and that’s what she got. Ken starts talking, and the judges tune out. Blah blah blah, excuse, excuse, excuse. Heidi thinks the green is sad, the lines aren’t doing her any good, and it’s making her boobs lopsided.

That whole Grope The Models After The Runway feature added this season does not work very well when the models are real people. I thought Helen’s client was going to crawl into a hole and die when a judge lunged in to feel the fabric on the bodice. And please stop touching the Mormon! That green dress just gets worse on closer inspection. As Zac says, “the zipper is going on a journey of its own.” The judges decide that she is much better than the dress, which is a good way to sum it up. And as for Alexander’s client in her half-finished suit, “you wanted to go sophisticated, but then he puts a flap on your shoulder!”

Gee, I wonder who the winner is…shuddup, Helen. You got the tall skinny client so it’s like starting on third base and calling it a pop fly. Or something like that. Justin, Bradon, and Alexandria are also in and scurry off of the runway. Alexander is in, and Ken and his anger management issues are out. Problem solved!

Reprinted with permission from www.hautetalk.com