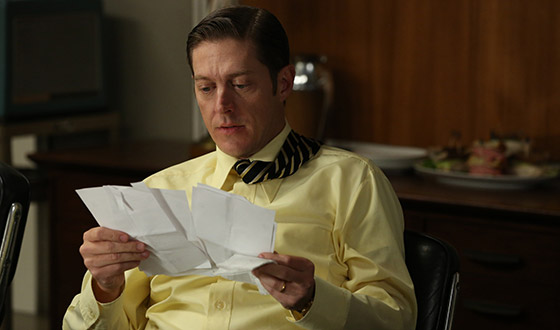 Reprinted with permission from www.hautetalk.com

Ted and Don are debating margarine. Ted is trying to sell Fleischmann’s as a luxury brand of margarine, and Don is trying to sell it as a better tasting margarine. Fascinating. Don and Ted call Peggy into the meeting to figure out what goes through her mind when she’s buying margarine. She hems and haws without ever choosing between Don’s idea and Ted’s idea. Don gives her a disapproving glare. Later, she explains that the difference between Ted and Don is that Ted is interested in the idea, whereas Don is only interested in his idea. Don says she’s wrong, that Ted is no different.

Betty is at an event in a long canary yellow gown. She is approached by one of Henry’s colleagues who hits on Betty. I can’t help but wonder about these canary yellow dresses. On the way home, Henry berates Betty for attracting male attention. He insists on knowing what his colleague said to her, and when she tells him, it turns Henry on (these two really have some bizarre fetishes).

Roger’s daughter, Margaret, brings her son to Sterling Cooper Draper Pryce Cutler Gleeson and Chaough (whew! I didn’t think my keyboard had so many letters) so that he can spend the day with Grandpa Roger. Before leaving, Margaret gives Joan quite the once-over. So what does a fun day with Grandpa Roger look like? Well, it begins with a trip to the zoo, and ends with taking a four-year-old to see Planet of the Apes. The movie gives the poor child nightmares, and now Grandpa Roger is no loner allowed to see his grandson without adult supervision.

Remember Duck? Now he’s a headhunter. Pete and Duck are having secret meetings to discuss Pete’s future in the advertising game. Duck explains that at SCDPCG and C, there are a whole lot of chiefs and not a lot of Indians, which does not bode well for Pete, the littlest chief. Pete asks Duck to “Paint me a new portrait.” Duck throws an account management job in Wichita out there, but that’s not enough for Pete. But there’s not much more that Duck can do for Pete at this time because Pete reeks of desperation. He advises Pete to manage his family because unless he can handle that, he’s never going to be put in charge of anything else.

Don runs into Betty at a gas station out in the country on their way to visit Bobby at summer camp. Once there, Bobby explains that he is Bobby #5, and points out Bobby #2, and how there’s no more Bobby #1 because he went home. And for the first time ever, Don and Betty have an enjoyable parental moment with their son. But leave it to them to screw things up again back at the motel. While discussing their kids, Don and Betty have a little moment. Just a small one, holding hands. But then Betty leaves the motel door open, and it becomes a bigger moment. “Close the door, you’ll let the bugs in,” is all it takes to get these exes into bed. Afterwards, Betty lights up a cigarette and the two of them discuss life. She’s happy with hers and just wants to enjoy the moment. She knows that she can only hold Don’s attention for so long, and she wants to soak it all in before it disappears again. Then, Betty brings up Megan. She puts her hand on Don’s face and says, “That poor girl, she doesn’t know that loving you is the worst way to get to you.” For an idiot (and Betty is fairly idiotic), she sure does have Don all figured out.  The next morning, Henry arrives to have breakfast with Betty, and there is both literally and figuratively no room at the table for Don.

Ted brings Peggy into his office and flips out because she touched his hand passing her a board in a presentation, and then she smiled at him, and now he’s shouting about how he never should have kissed her. Ted professes his love for Peggy in a roundabout way, and Peggy says that she didn’t’ know he felt that way, and my goodness, she looks fabulous (for Peggy, that is) with shiny black hair and a tight dress that somehow matches the pattern on the wallpaper. Suddenly she’s that girl at the office being chased by the boss, and she likes it.

Pete really must be desperate because he asks Joan for her advice. He wants to know if she feels his attention to business has been off lately because he’s being pulled in a million different directions at home. Joan explains that she can’t solve his problems because she has those same problems herself. Pete thanks her for something he can’t quite explain. It seems like Pete is starting to realize that without his family’s wealth and influence, he is an incredibly ordinary person.

Peggy goes home to find Abe cleaning up broken glass in their bedroom. Someone threw a rock through the window, and Peggy worries that it had to do with an incident in the neighborhood the night before that Abe had witnessed. This causes her to hit her breaking point. Abe agrees to put the apartment on the market and look for one in a safer place and tells Peggy to sleep in the other room until he can get the window fixed. That night, Peggy hears fighting and broken bottles outside and grabs…what is that, a spear? She slowly approaches the window when she’s startled by a noise behind her and in the dark, she somehow stabs Abe in the stomach with a spear! OMG!!! What just happened!!! Peggy killed Abe! Wait, no, he’s not dead yet. In fact, he’s alive enough to break up with Peggy in the ambulance. He tells her, “You’re scared. You’re a scared person who hides behind complacency,” which is kind of maybe true, but still. That’s harsh, breaking up with the woman who stabbed you in the stomach on the way to the hospital. Really, Abe. Not cool.

Back in Manhattan, Megan is dressed up in a red lace pants suit and blonde wig, and puts on a terrible French accent for her role as Colette, the evil twin sister of the French maid on the soap opera. Later that night, Arlene stops by for a visit. She came over because she was worried about Megan. Megan explains how different it’s been with Don lately, and how she feels so lonely, and there’s that kiss from Arlene we saw coming from a mile away. Megan asks Arlene to stop, and Arlene calls her a tease—Megan asked her over, Don is out of town, they finished two bottles of wine, there’s the whole “I’m so lonely” line…what’s a woman to think?

Joan and Bob Bensen are packing to go to the beach, which looks like their millionth date because they are very comfortable with each other. For some reason, Roger stops by. He doesn’t recognize Bob, and comes up with the weirdest and flimsiest excuse for popping by that falls apart quicker than a Bluth model home. Awkward! Back at the office, Joan tells Roger that he can’t drop in like that because it’s too confusing for Kevin. “But I’m his father,” he explains. Joan corrects Roger and tells him that Greg is Kevin’s father, which leaves Roger wondering, “Who’s going to watch teevee with him, Bob Bunsen?” Joan knows that Roger wants to be around, but she can’t count on him wanting to be around consistently. At least with Greg, little Kevin will grow up thinking that his father is a war hero. With Roger, there’s just…Roger.

When Don returns to New York, he claims to have missed Megan but we all know Don better than that (and by “we,” I mean Betty). She’s wearing a cute little white t-shirt with a red star on the front, and she looks so young compared to Don in his sports jacket. They both want to change, but change is hard.

Peggy goes to see Ted in a mint-green dress with white polka dots that is more tragic than stabbing your boyfriend in the stomach. She explains that “Abe got stabbed,” and he’s going to be fine, but it’s over between them, so….Ted fills the pregnant pause with work, and Peggy takes the hint. Men. They only want what they can’t have, and it took stabbing her boyfriend to teach Peggy that very simple lesson.

Next week, Joan, Peggy in a yellow dress, and Megan in a cute sweater and jeans.