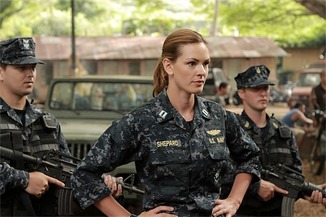 She is so Seriously ready to shoot someone. I know just what that feels like.

Drunk Mommy back with a belated recap of the second Serious Actor Face episode of Last Resort. Sorry for the delay, but Nyquil has been my drink of choice lately. Whee! But enough about me, here we are again in the exotic and tropical land of Serious Actor Faces. Immediate note to self and Captain Andre Braugher: If my child was serving in the US Army, I might choose NOT to blow up Washington DC. Could cramp their career options.

Note to readers: in this episode I may try to actually learn characters’ (as opposed to actors’) names. Depends on how terrible it is.

Surprise! If you bomb Washington DC, you will indeed be the popular girl at the dance. And the XO (Speedman? I’d like to learn his character name but nobody seems to be using it) is urging the maverick submariner Captain – Marcus? – to be uncharacteristically cautious. Don’t use technology to disappear! Work it out! Hug it out! Just because other ships are hunting us doesn’t mean we can’t be friends!

Cut to Sam’s wife (XO Speedman–finally his character has a name) being questioned by nameless people who work for agencies with lots of initials for names.

Cut to grizzly sour face blue eyed Robert Patrick. Alive! In prison on the mysterious tropical island. Lots of euphemistic conversation and Mr. Patrick being called ‘cod.’ Not enough submariner speak for me yet. Not by a long shot.

Somehow the Captain and XO are off the submarine and back on the island? Its an aerial invasion! Hot Admiral’s Daughter volunteers to investigate. Brave girl. Stupid, brave girl.

Dollhouse girl is back with the young SEAL in the bar. Whee! Hangover! Vomit! This show gets better and better. XO Sam tough loves him into helping face the invasion. He then gives an absurd and apparently naked speech about HALO jumps. Okay. Dollhouse girl listens with a blank Dollhouse face.

Jump to Island Scientist Chick. Wait, will she help with the invasion? Will she? Would they script someone asking her if she wouldn’t? Cut to XO Sam’s wife…again with the suits. BOR-ING! She’s brokering a deal? Ugh. Terrible wife. Oh wait! Switcheroo! She didn’t drink the Governmental Kool-aid.  Poor Sam. I predict wife’s death soon. It’s the only way he can act on all the sexual tension, right?

And we’re back with the sexy scientist chick. I’m kind of liking her, though she’s no more realistic. In a non-shocking plot twist, she is going to protect her tech by using all of her dirty secrets and push-up bras. Minions! Where are her minions? They really need to find an opportunity to put her in a lacy black slip and dirty librarian glasses. Times a-wasting people! This show could get canceled and it would be a sadly wasted opportunity for dirty librarian glasses.

Submariner special ops are hitting the road, lead by the Admiral’s Daughter and strapped and ready for action….Never mind. Cut to Sam’s wife being threatened by the suits. Tortured by nonsensical videos of her husband! Aaaaaand cut back to the island and submariner special ops. Island Scientist Girl is with them, learning just how noble they are. Snooze! Watch out Admiral’s Daughter, the men are conspiring against you. Lots of meaningful glances and Serious Actor Faces.

Um, cut back to SEAL and Dollhouse girl? I have no idea what happened except that she painted on the guy’s Serious Actor Face.

XO Sam hanging out in the field, trying to talk the invaders down? Trying to get himself killed? Confused. The Russians are here with Serious Russian Actor Faces. Why do we need the Russian’s here? And how does Captain Marcus know just which Very Important Russian Official to threaten? Serious, Serious Actor Faces abound.

Cut to Sam’s wife. Bor-ing! She’s about to be conned by a government plant. Oh good, XO Sam’s wife’s name is Christine? Okay Christine, don’t believe Sam’s Friend. He is fake! But she does seem like a girl who’d like a white knight so, let’s have some more Serious Actor Face as he sweeps her off her feet and away from all those bad people in suits.

Back to the island. People are bugging out. They have bloodlust in their hearts, they want to kill the captive Russians and They. Can. Not. Handle. The. Truth! Luckily Captain Marcus of the submarine class blah-blah-blah is there to remind them of who they are. Submariners! Good crinkly face from Robert Patrick. What? He is a firebrand! Oh, his name is Joe? Really? Hmm. Serious. Actor. Face.

Cut to a deep moment with Grace. Cut to…flag waving and lots of swelling string music. And…preview! Oh good, Mysterious Island Guy will be back next week. I am sure he will be dastardly, but I really want to know when XO Sam is going to take his shirt off. I’ll drink to that!