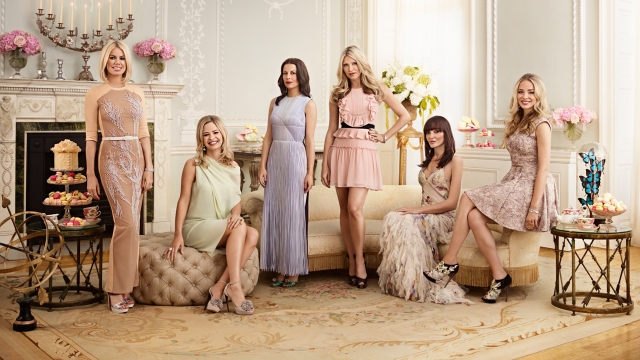 My favorite Real Housewives are New York, followed by Orange County, and then maybe Beverly Hills. But I’m ready to switch it up and cross the pond for some Real Brits. Or, rather, two Brits and a smattering of Americans who married into the crown. Let’s meet our ladies:

Caroline
Caroline is a member of an Olde English Family. She is married to an investment banker and claims to have “mixed with the royals from a very young age.” She runs some sort of gifts-­‐for-­‐rich-­‐people-­‐who-­‐can’t-­‐be-­‐bothered-­‐to-­‐pick-­‐out-­‐their-­‐own-­‐ gifts business.

Caprice
A trashtastic former “sex symbol” transplant from ’murica, Caprice is about as British as Madonna but with a fraction of the class. One of her claims-­‐to-­‐fame is having dated David Spade, so…yeah. Oof. Caprice thinks she has been accepted into British social circles, but her British frenemies have their own thoughts on the matter.

Annabelle
I adore this chick. She was Alexander McQueen’s muse, and I want all of her clothes. That unicorn sweater! The “God Save The Queen” military jacket! GIVE ME THOSE RIDING BOOTS!!!

Noelle
Noelle is another Stupid American. She’s a former model from Seattle, because Seattle and London go together like peanut butter and kiwis. She is a very successful gold digger who is currently dating a man who served jail time for something involving money. And like a good girlfriend, Noelle vows to leave him if he can’t get the case sorted out.

Juliet
This one is a Chicago girl who has only been in London for three years. She lives in a bad part of town, south of a river. She used to know famous people, but now she’s just boring. And very, very American. She is…noisy.

Marissa
Marissa is a California blonde married to “a Brit.” She was shunned by London society…until everyone learned that her husband owns a very exclusive nightclub. She dresses like Holly Hobby’s awkward younger sister for a day in the park with her husband and small child. Marissa is thisclose to becoming a UK citizen to avoid a long cue at customs.

Juliet visits Marissa at her mansionette. The two Americans attempt to make a cup of tea and fail miserably. They gossip about Noelle and her jailbird husband and his broken finger. It broke while he was putting on skinny jeans. Juliet does not want to be associated with Noelle’s husband. The word “shady” is bantered about, and then the ladies arrive at an empty restaurant for afternoon tea. “It’s so cuuuute! It’s so cute here! So cute!” Noelle is there, and she doesn’t want to talk about her husband. Juliet pushes and pushes and pushes, and Noelle is having none of it, nope. Not a bit.

Noelle and Caprice go to lunch so that Caprice can give Noelle advice on how to get by in their adopted town. Caprice’s advice is to not be so pretty, which she seems to have taken to heart. “Some people think Noelle is a golddigger—I just think she’s a hustler.” Oh well that’s much better!

Caroline is preparing for “a nice, sophisticated day out” with Caprice and Annabelle. It’s Polo In The Park, which I think is the British version of Shakespeare In The Park. In one car, the Brits. In the other, the Yankees. They all converge on a…box? Are there boxes at polo matches? Like, reserved standing areas? The Brits mock the Americans for being overdressed, and for the fawning. They bond over knowing nothing about polo. “Nobody goes to polo to watch polo.” And nobody talks about going to polo to watch polo, either.

Next week a royal baby and a fashion show.