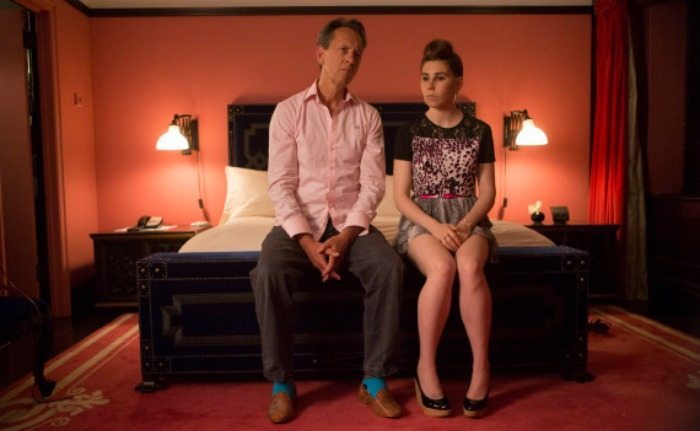 Hannah is waiting at a bistro for Patti LuPone so that she can conduct an interview. Adam calls her from his callback and he’s super duper nervous. He gets off the phone and meets another actor who looks very much like him, but who is reading for a different part in the Broadway show. Aww, Patti LuPone cancels the interview. But good news for Adam, he got the part. He goes into the bathroom, stuffs paper towels into his mouth, and does a muffled shout that almost makes him charming. His buddy from the waiting room also got the part, so they bro out and ride off on a motorcycle.

Because Hannah is uber awkward, she tracks down Ms. LuPone and asks for five minutes. And it’s all about Hannah and her byline, and how Ms. LuPone has to mention the bone density product they’re selling. They decide that Patti has had osteoporosis for five years. She fractured her ankle walking her imaginary French bulldog, and Hannah actually takes a call from Adam in the middle of the interview. Do not do that, ever. In fact, turn your phone off when you arrive at work and do not check it until you leave. Trust me, whatever else is going on is not in your job description! Patti warns Hannah that Adam is going to be a complete a**hole prepping for his role, during the run, and after it’s over. And she warns her that he’s going to sleep around, even though he’s funny looking. “The Elephant Man got laid a lot.”

Marnie runs into her old friend, Sue Jen, who is opening her own gallery in NoHo because she doesn’t give a fuck. And she’s dirt poor, except for all of her parents’ money that’s going to publicity and architects and blah blah blah where did my youth go? Marnie, on the other hand, is eating FroYo in sweatpants.

Hannah needs to check into the Gramercy Park Hotel so that she can write sixteen reasons why we still love it. Then she gets her first weekly paycheck. After taxes, it’s way more than her rent. Okay, real talk. No, it’s not. Her weekly paycheck is not more than her rent, because she has a multiple bedroom apartment. Sure, it’s in Greenpoint, but still. She’d have to be well into the six figures before her weekly take-home pay approached her rent, which, as a writer of advertisements in magazines that people no longer read, she’s not. Also, to highlight how much Lena Dunham has never had a job and is therefore writing out of her ass, who the heck gets weekly paychecks? Twice a month, hon. And direct deposit. Real talk, over.

Instead of working for all of that money, Hannah blows off her deadlines and goes shopping. Meanwhile, Jessa is suffering from ennui when that crazy Brit from rehab tracks her down. “You’re a wild thing, you can’t be tamed! Come away with me, I know what you need!” That’s not going to end well.

Marnie eats pizza and yammers to Ray about her lousy day, but he can’t do it because it’s not real. “You can’t break up with me Ray, I don’t care about this.” She takes her pizza and leaves.

Hannah has a giant mega baller suite at the Gramercy Park Hotel and celebrates Adam’s part with Shoshanna, Elijah, and Adam’s new work buddy who apparently was on One Tree Hill. Marnie shows up while Adam’s buddy is monologuing about his visionquest to make it all about her. That’s going to be tough with all of that guitar playing and theater acting in the living room. Oh wait, is this a love connection with the actor buddy? Adam doesn’t really want to be a part of the Broadway scene, and Elijah warns, “Well don’t come crying to me when Kristin Chenoweth passes out because you forgot to feed her.”

Jessa arrives with the Brit, high as a kite. The best thing though? He talks at Shoshanna’s pace. It’s perfection. In a new low that I can’t believe no one stopped before it started (some friends, huh?) Jessa steals money from the clothing store. She ends up in a sh*tty hotel with the Brit doing lines of coke off of inferior barware.