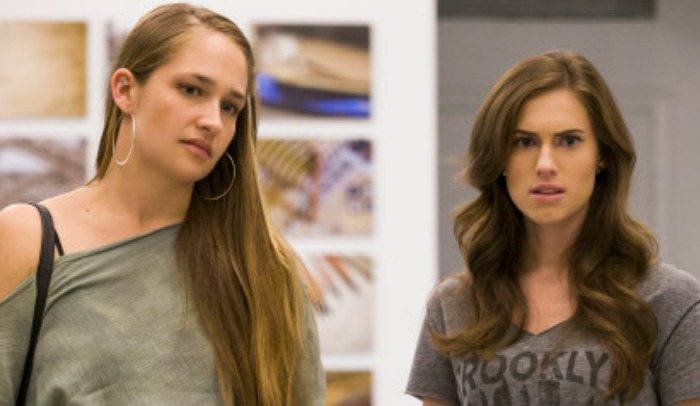 Adam and Hannah are having sex so we get the whole nudity thing over with in the first few seconds. Drink! In one fell swoop, Adam removes the condom, puts on his shirt, and heads back to Ray’s apartment to practice his vocal exercises.

Hannah can’t really take the hint so she wanders over to Ray’s place to annoy Adam. She feels like Adam is leaving her in slow motion. But he can’t concentrate when she’s around because seeing her is playtime and he needs to think worktime. So he takes her home in a cab that I’m not sure how these two can afford and goes back to Ray’s apartment.

Marnie takes the job as the dim bulb’s assistant. When the dim bulb leaves, Marnie takes the opportunity to shmooze a famous photographer lady. There’s also an open mic thing that Marnie’s doing, but Elijah doesn’t want to go because “she sucks and she needs to stop.” Her performance style is “too stiff and too hopeful.” Hannah has to meet Patti LuPone again since she failed to get any useful material about bone density at their last interview. Hannah lets Elijah tag along because she is both unprofessional and unaware. 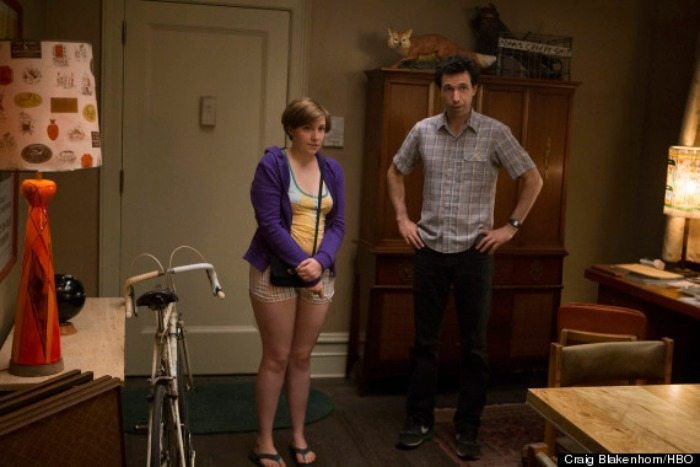 Jessa likes to dance. Shoshanna likes to talk as fast as Jessa dances. That is all.

Hannah and Elijah visit Patti LuPone. It gets awkward when Elijah speaks and implies that Patti LuPone was ever an underdog. I think maybe she’s been drinking just a tad.

So it’s not just the chicks, huh? Male millennials have no need for privacy, either? Ray shaves while Adam soaks in a tub and they complain about women.

At work, Hannah declares BS. They’re a squanderization of talent. You see, she’s a real writer. “Am I seriously the only one of us who prides herself on being a truly authentic person…I just expect more from life….” All of this in front of the boss. Guess who’s fired?!

Jessa wanders into the gallery where Marnie is assisting and gets a job as the famous artist’s archivist. Guess who’s fuming?!

Backstage at the performance thing, Marnie and Adam’s guitar-playing friend have a moment. “You know I have a girlfriend, right? That’s not a big issue, is it?” They play guitar and sing and Elijah hopes it’ll be a real mess. But it’s not. It’s very good Lilith Fair music. Shoshanna asks if Hannah’s okay because Adam’s about to be on Broadway and Marnie’s about to be a pop star and Hanna’s supposed to be the talented one but she’s not about to be anything. Then, the girlfriend intervenes and she’s like a hot version of Marnie, so…awkward? And it sends Marnie right back to Ray, her ultimate back-up plan.

At the Broadway practice after party bar thing, Hannah’s bored as hell listening to the theater stories. “I got fired from my job today.” That’s kind of a downer. Adam carries a drunk Hannah back to Ray’s apartment, completely unaware that Ray is busy screwing Marnie. Hannah walks in on them because of that lack of boundaries I was talking about earlier. “Are you effing kidding me?!….You will never judge me again.”

Totally unrelated, but does it bother anyone else that it’s never winter on Girls, but it seems to always and forever be winter in New York?