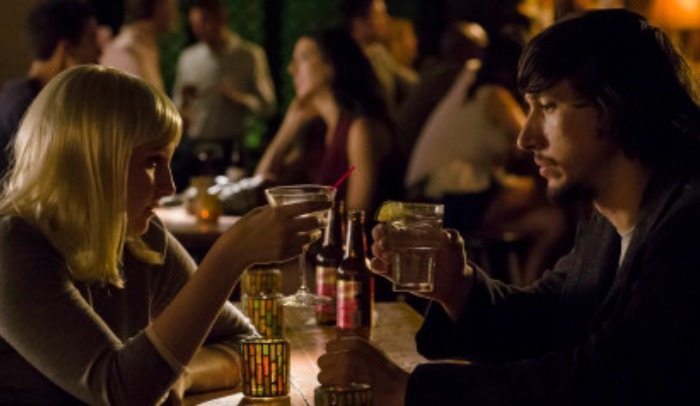 Hannah’s idea of succeeding at her new job is to get hammered with her coworkers, make out with one of her bosses, and vomit on herself before passing out and being taken to a coworker’s apartment to vomit some more. She ends up might-as-well-be naked in the tub, then wrapped in flannel in his bed. Morning is confusing.

Marnie visits her frenemy at her new gallery and is offered an assistant position. Assistant? Well, her best friend Jeremy is already gallery director, so, yeah. Assistant.

When Hannah gets home, she’s so so so so sorry, but Adam doesn’t seem to care. He’s more concerned with his wardrobe, which is so not Adam. Yup, her top’s off. Drink! Adam rejects her advances because he doesn’t want to get sticky before rehearsal, and now I’m really not hungry anymore.

Marnie is meeting with Adam’s costar and shows him her journal that she wrote on Ambien. He thinks it would work perfectly as a song and calls her a wordsmith. She’s wearing a knit hat and feeling all hipsterific, so she sings while he plays guitar. “There’s flowers in the attic, and I haven’t met Tom yeeeeet!” Then he sings to her. “I need you in my bed now…I’m dying of this thirst girl….” But he was singing it about his girlfriend, Clementine. She lives in Canada.

Oh hi, Jessa. You have the shakes. Must be nice to have such nice friends, who do nothing as you wander off into junkieville. Look! It’s Shoshanna, right there in the same room with headphones on so she doesn’t have to listen to the ramblings of Jessa and her coked up boyfriend. Just sitting there, not doing anything about it other than pretending like everything is normal.

Hannah pops in to check out rehearsals, but she gets kicked out because nobody watches rehearsals. So she hops into bed with Elijah and they eat their feelings.  Then, she calls Adam to plan a rendezvous. She puts on a ton of makeup and a blonde wig to spice things up, but his reaction is “what the…?” as he tries to figure out what on earth is up. Happy role playing! He gets a drink to the face and the show hits the sidewalk and a stranger hits Adam. 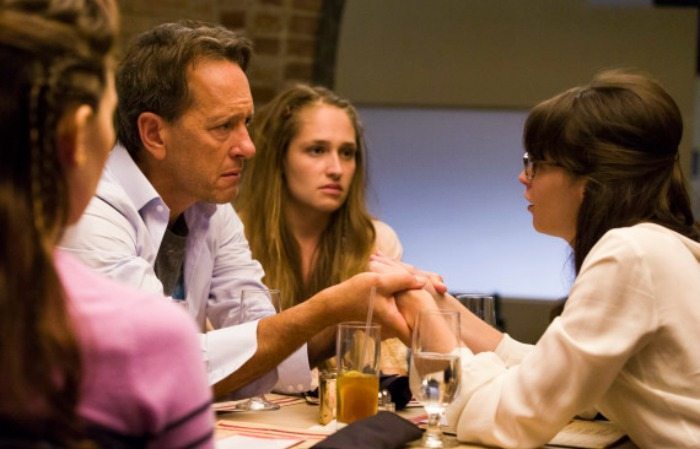 Oh thank goodness, Shoshanah plans an interventionish. She finds Jessa’s boyfriend’s daughter, Dottie. He tries to send her away while Jessa picks at her face. Dottie explains that her father is wonderful when he’s sober, so he’s worth saving. She wants her father to “get rid of her.” Dottie says Jessa doesn’t seem like a very nice girl, and hopes she can find the help that she needs.

Hannah takes Adam to Marnie’s apartment and the show goes on. It’s her husband’s apartment, a destroyed dildo, blah blah blah. Oh jeez, she takes off her top and there’s some sort of homemade knit bondage macramé. Adam gives her directions to eat fruit. “From now on the rule is you can’t just have part, you have to take the whole thing or nothing.” Ugh, these two. Then, they have sex. Then, they fight. “You have an old idea of who I am.” And then it happens. Adam has to focus on his part, so he’s going to stay with Ray for a while. It’s just like Patti LuPone said it would be.

Jessa is sad because her boyfriend chose his life and his daughter over her. And did Shoshanna stop by Cancun on her way over to Brooklyn, because that hair braid thing is…interesting.