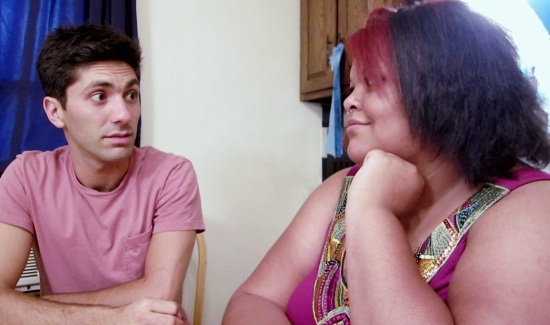 Soooo…. In your profile you are white, and weigh 100 lbs? And you think the guy you met online is who he says he is? Okkkkaaaaayyy….

Catfish, I assume, refers to bottom dwellers, so obviously it is the perfect name for an MTV show about people who meet (romantically?) online and then attempt to meet in real life. The dynamic is that at least one of the people is faking who they are. Apparently the ‘host’ Yaniv “Nev” Schulman made a documentary film about his own failed? deceptive? fraudulent? online relationship and has now turned the concept into a series.

Ah, the Internet. Where we conceal our true selves behind online personas. Where we can edit, retouch, and fake it til we make it. In the episode I saw, a man had presented himself online, for over a year, as who he really is – twentysomething single dad with a band and a blue-collar job. But then the girl he met online morphed from a hot blond funny skinny minnie to a 200+ lb funny, insecure brunette who lives in a storage shed behind a house in Mississippi. Ugh.  I can only imagine how ill he felt as she spouted her love and devotion for him from lips and a face that were utterly unfamiliar.

On Facebook, Twitter, Google+, terribletelevision.com, we can create whole fake worlds for ourselves if we choose. We can edit to present only the best part of ourselves, or we can present totally fake parts of ourselves. But one of the things that the show acknowledges is that, as much as the internet can allow us to present the truth of our minds, the reality is that we are physical people and your attractions are what they are.

And – wow – this show is terrific advertising for Google Image Search!

If you present as the opposite of what you are physically, the idea that your mind will transcend that physical persona is COMPLETELY unrealistic. Mentally, you may connect and be friends. But as Pattie Stanger of The Millionaire Matchmaker  (a Terrible Television for another day) likes to say, “I believe the penis does the picking. If the penis does not get off the couch and raise the flag pole, I got no match. Mr. Downstairs knows who he likes and who he doesn’t like.” That picker is hardwired to the eyeballs people.

Thank goodness DrunkDaddy and I met in real life. Hmmm…think I’ll ask him for some cava. Champagne masquerading as something cheaper. I mean, less expensive. I mean… egh it tastes good!