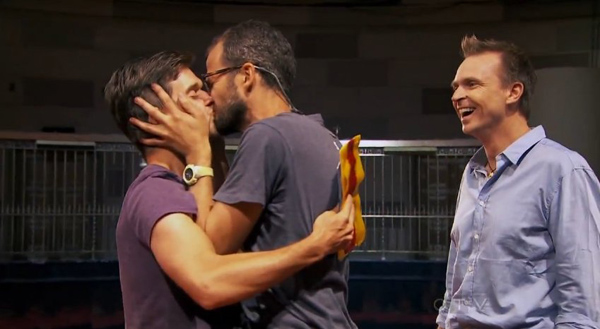 In an astonishing come-from-behind victory, The Beekman Boys win The Amazing Race! How did Josh and Brent, a team with no discernible racing skills, do it? By keeping calm and carrying on.

The Beekman Boys were in last or near-last place the entire Race and only seemed to catch a lucky break when New York was selected as the final city (Josh lives in New York City, and Brent used to live there before he went the whole “I want to be a goat farmer” route). But even that didn’t seem to be of much use as the Boys struggled with one of the tasks. The remaining teams had to deliver ten Lombardi’s pizzas to three different addresses, and oh gosh. Poor Josh. He messed up the orders. If they didn’t end up winning the million bucks, Brent was never, ever, ever going to let him live that down.

In the end, they eked out a victory when Josh redeemed himself at the final task. One member from each team had to remember how to say “hello” and “goodbye” in a bunch of the languages experienced during the Race. Then, they had to match the words, which were written on banners, to the correct nation flags and raise the banners on flagpoles at the United Nations. After matching France, Spain, and China correctly, Josh figured out that it was more of a numbers game than anything else. Over the course of nearly three hours, he fastidiously ran through all of the different combinations in an organized fashion until he came up with the correct pairings. The other teams, however, relied on random guesses and generally went into freak-out mode, allowing Josh and Brent to race for the finish line with a slight lead.

So. I can’t swim, I can’t drive, I have zero upper body strength, and I’ve been known to have serious meltdowns in cities all across the globe. Who wants to go on The Amazing Race with me? Come on, it’ll be fun! And at the very least, it’ll be Terrible Television.