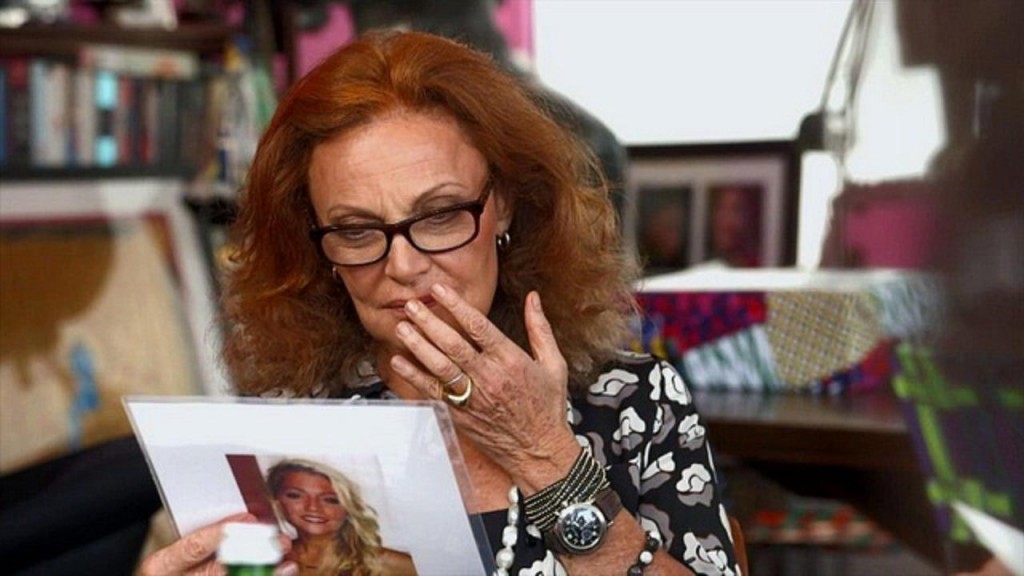 Welcome to the second season of House Of DVF, where fashion icon and walking wrap dress Diane Von Furstenberg conducts the most elaborate job interview ever to find its new brand ambassador. Basically, the job candidates have to work for DVF until all but one drop. But…what are they gonna do with the old brand ambassador, Brittany Hampton? I guess just toss her on the heaping pile of former somethingorothers because she’s about to be replaced. But before that happens, she is contractually obligated to help select her upgrade, with a smile and a smize. Wait, no, wrong show. Anyway, to the reaping!

The interviews begin where all good things should, in New York. Diane and Brittany are assisted in the arduous task of selecting the next brand ambassador by two executive-ish assistants, Brunette and Redhead. Brunette interviews potential candidates in her office, whereas Redheaded conducts her interviews at…a bar? Sure, why not.

Brunette and Redhead run their picks past Diane via iPad. One of the candidates, Cat, has the balls to say that the cool kids aren’t wearing DVF, which, truth. This earns her a for realsies interview along with Chantal, who is no more interesting than a tub of low fat yogurt. There’s also Jeremy who styled someone important with nothing but a ring, and Maytee, who lost a hundred pounds to be there because heaven forbid anyone in the fashion industry weight as much as a normal human.

Cat Balls Out walks up to Anna Wintour in the front row and asks her an incomprehensible question for DVF dot com. Ms. Wintour looks frightened and alone, and I’m pretty sure someone is getting fired for allowing this to happen.

After the runway show, the four candidates show Diane their photos so that she can see the fashion show through their eyes. Cat kisses up with a photo of Diane, and she falls for it hard. Maytee hands over two unremarkable photos, but Diane likes her “joie de vivre.” Chantal tries to make up for vomiting with some action shots of the models feeling all the feels. Not bad, Chantal. Jeremy took close-ups of pants suits and it’s pretty awful. Diane does not feel that he captured the mood of the show. She hands him a gift bag and shoves him out the door.

With three candidates from the East Coast locked in, it’s time to sift through the peons on the West Coast. Brittnay asks one of the candidates how having a child affects her work life which I’m pretty sure would be a massive HR violation if this were a real job interview. Brunette and Redhead join forces to interview a lot of dingbats, including someone who calls outfits wowfits. A candidate gets bonus points for showing up in a wrap dress which, duh. Then, “My name is Allie, and I was actually born in an alley.” Oh FFS.

Diane invites her family, employees, and Christian Louboutin over for a slumber party to choose the final candidates, who all seem to have a modeling portfolio for a job that does not involve modeling. The group culls the herd to four annoying people plus one nice girl named Leah. There’s Hannah in a very fuzzy outfit, psychic/psycho Cree, Allie From The Valley (in head-to-toe bubblegum pink), and Breagan The Single Mom.

The five candidates are tasked with styling Rachel Zoe from whatever shmatas they can find in a DVF store, and somehow Allie sweats all over a dress before Rachel even arrives. Cree takes charge of the situation and welcomes Rachel to her humble home as each candidate explains why they chose their look. “I…love you in a gold moment?” Rachel Zoe has thoughts. She would not wear a jumpsuit to Vanity Fair. Cree’s above-the-knee dress is a no-no because Rachel does not show her knees, ever. Which makes me wonder if she’s smuggling two elderly men who are angry about their pudding underneath all of those maxi dresses. Hannah’s black sequined maxi dress with a plunging neckline is the clear winner. “That’s a moment…that’s a real moment.”

With four spots for five people, someone has to go home. Hannah stays because she won the styling challenge. Nice Leah gets to stay because she exhibited enthusiasm despite making no sense with her words. Cree was a clunker on her dress selection, but saved herself by leading the discussion when Rachel Zoe entered the room.

So, between Single Mom and Barbie’s Dreamhouse, Diane eliminates Single Mom because “first of all, never mention your child and sacrifice….” Sigh. Thanks, Diane Von Furstenberg, for setting such a lousy example for women everywhere. Single Mom already made the hard decision to leave her kid in what I assume are capable hands while she furthers her career and doesn’t need you second-guessing her parenting skills. I have heard that it’s entirely possible to raise a kid and work at the same time, but I guess that’s not an option at DVF.

Next week, the nine contestants will begin battling each other to the death for the opportunity to secure a job with a starting salary that couldn’t even buy you a Birkin Bag.