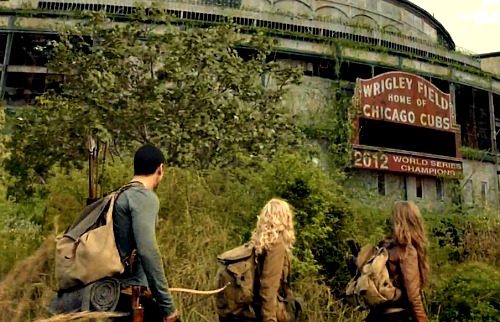 I’m a sucker for sci-fi. I love global destruction, dystopian societies, and end-of-the-world calamities. So when I saw the commercial for Revolution, I was pretty damned excited. Not only did it promise mystery and intrigue combined with stunning visuals of a weird, changed world, but it had some rather impressive names attached. J.J. Abrams, Jon Favreau, and television’s bestest bad boy, Giancarlo Esposito.  But only minutes into the season premiere, I knew the show would fall far short of my expectations.

Everything using electricity turned off, all at once. People died of starvation and disease, and nobody knows why it happened. Fifteen years after the blackout, suburban Chicago has transformed itself into a forest. Trees grow where pavement once lay, and crops line the streets. And we’re supposed to care why this happened. That’s the big mystery—why did the lights turn off? But I don’t care. I kind of just want to see the immediate aftermath, but we only get a two second glimpse before fast forwarding to Colonial Williamsburg.  Instead of focusing on the starvation and disease and iPhone withdrawal, we get a scene of some guy copying data onto a flash drive moments before the lights go out which is then disguised as an Ed Hardy necklace. Snore. Show me chaos! Show me looting! Show me anything other than harvesting crops and hunting for deer.

Speaking of hunting, another problem I have with Revolution is that it’s desperately trying to ride The Hunger Games wave by making a bow and arrow the main weapon used by its teenaged characters. Yeah, we get it. They hunt for food. Crazy how fast plants grow in this region, especially considering the icy cold winters the northern Midwest is famous for. See what I mean? Revolution is kind of infuriating in the way it glosses over some basic details. Take grooming, for instance. The world goes to shit, yet the women never stop waxing and plucking. I don’t know about you, but if I was in survival mode, the first thing that I would forgo is the deforestation of my body hair. Maybe I would shape my eyebrows for six or seven months, but after spending all day scavenging for food and all night protecting my homestead, I’d probably give it up.

Anyway, here are the basics that we know so far: the American government fell and reformed as The Republic of Monroe, and the military is looking for the guy who copied the data onto his Ed Hardy necklace, Ben, along with Ben’s brother, Miles, who used to be in the U.S. Army. Ben is quickly killed off by the spectacular Giancarlo Esposito, and Ben’s son, Danny, gets taken into custody as a replacement prisoner. Ben’s dying words to his daughter, Charlie, are to go find Miles in Chicago so that he can get Danny back. Charlie then takes off on a journey to find Uncle Miles with her neighbor (who now holds the Ed Hardy jewelry) and her dead father’s girlfriend. Along the way they happen upon Nate, another handsome teenaged boy with an official Hunger Games Bow And Arrow Kit, and he joins their group. They kill a few bandits in an abandoned private jet, and bing bang boom, they’re in Chicago. How do we know they made it to Chicago? Because of the tired, overwrought shot of Wrigley Field covered in vines and plants and green.

Not only was the walk to Chicago a relative breeze, but as luck would have it, Uncle Miles is the first Chicagoan that the group happens upon. I had sort of tuned out before, but this really made me roll my eyes in disgust. Seriously? They just wander into a bar, ask for Miles, and he’s there? No. Just, no. My imagination is fairly pliant, but this stretches credibility past the breaking point.

Other incredible things that made me shout “are you freaking kidding me?” and “do you think we’re stupid?” at the television:

So. Will I tune in again? Probably, because I have fairly lousy taste in television shows. I thought the first episode of Lost was crap and still tuned in religiously for seven seasons and have seen nearly every episode of Survivor. But I’m still classifying Revolution as terrible television.

Revolution is on Mondays, 10 p.m. on NBC. You have been warned.