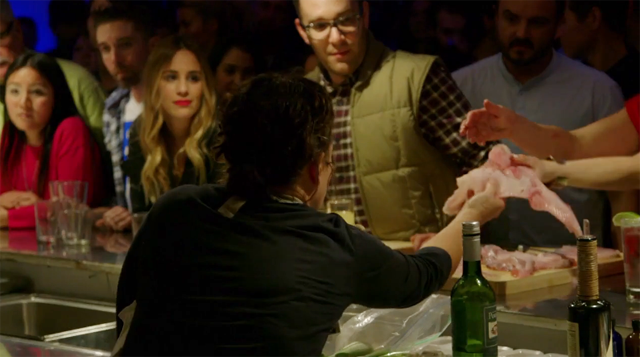 Clutch your pearls and shorten your skirts because it’s ladies’ night at The Gorbals on this week’s Knife Fight! One night out of the year, Ilan Hall puts away all of the sharp objects and confusing gizmos with their “number” and “buttons” so that two female chefs can prepare food for him without becoming hysterical or, heaven forbid, crying. The two lucky ladies are Border Grill’s Mary Sue Milliken and her bestest of besties, James Beard award winning chef Tracy Des Jardin.

They have one hour to prepare at least two dishes and must use all of the three secret ingredients:

Mary Sue begins by putting a good sear on the pheasant before grabbing a handful of gizzards. Tracy is befuddled by the yuca so she moves onto the skate wing, but needs a judge’s help fileting the fish because ladies, amirite? Tracy is using the bones in a sauce that sounds like a better plan than asking anyone to eat an actual skate wing.

Mary Sue’s sous chef is in the audience so she puts him to work forming meatballs. Oh ha, the yuca is not so fresh. Nice, Ilan. You gave the women rotten ingredients. Oh good, Mary Sue is frying up those chips I was talking about, and now I really want some chips and salsa.

The first dish is coming out, and it’s Tracy’s sauteéd skate wing. There’s a debate over its level of deliciousness, and something about acid because cooking show judges always talk about the acid. Then, Tracy hacks up a pheasant like it wronged her very, very badly.

Mary Sue tosses pheasant meatballs into a soup and serves it to the judges with yuca chips. So…she pretty much covered all bases in one dish. For her next trick, she prepares a fresh salsa to brighten up something burning on the stove.

Tracy tries to mill some potatoes, but the food mill breaks mid-turn. What kind of two-bit operation is Ilan running? Then, she busts out her own very special ingredient—black truffle. For her pureed potatoes. That’s, like, cheating.

The final two dishes are served. First is Tracy’s poached pheasant breast with potato puree and crispy yucca. Next is Mary Sue’s sautéed skate wing over celery root puree. The black truffles are a hit because, come on, who doesn’t like pureed potatoes with black truffle? There’s no celery puree in the world that can compare.

And the winner is…Tracy Des Jardin because you cannot outdo black truffle potatoes.