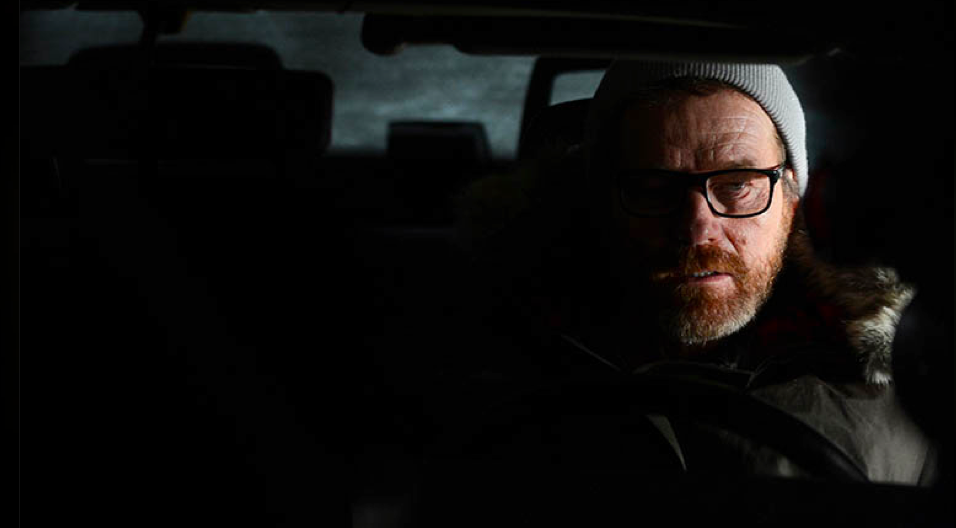 Walt climbs into a snow-covered car and waits for the blinking red and blue police lights to clear before starting the engine with keys that he found in the sun visor. He has direction and purpose for the first time in who knows how long, and he’s headed home.

Looking vaguely homeless, he stretches out in the New Mexico sun and grabs some pills and cash from the trunk of his car. He calls his old friends and business partners, the Schwartzes, pretending to be from The New York Times following up on their recent television interview. Walt waits for them to come home and turn the alarm off before walking inside for an unexpected reunion. He takes time to admire photographs and knickknacks before freaking them the heck out. “Hello, Gretchen. Elliott. I really like your new house.” He’s here to give them something in his car and asks them to take a walk.

The three old friends stack up what’s left of Walt’s money on a coffee table. “That is nine million, seven hundred and twenty thousand dollars.” He says that he earned it, and they are going to give it to his children. He has it all worked out. The Schwartzes will give it to Junior in ten months, on his eighteenth birthday, as an irrevocable trust to use for college and the betterment of his family. Walt can’t give it to his family himself because they hate him and don’t want the drug money, but coming from two rich benefactors who used to be very close to the White family would pass muster with Skyler and Junior, and the Feds. Smart, Walt. Very smart. And not at all crazy.

Suddenly, there are two red dots pointing at Gretchen and Elliot. Walt spent two hundred thousand dollars to pay off hit men to take them out if his family doesn’t get the money. Okay. Very very smart, and just a little bit crazy. “Cheer up, beautiful people. This is where you get to make it right.”

Once he leaves, Walt lets the two “hit men” into the car. It’s Badger and that other guy with laser pointers, and it makes me love all of them just a little too much. “What’s this I hear about blue meth still being out there?” They confirm that it is still being sold, and the two junkies are shocked that it isn’t still Walt doing the cooking. “Jesse.”

Speaking of Jesse, he has a little crafts project going in the woodshop. A box. A perfect wooden box that he loves and hugs and kisses….and then he snaps to and is chained up in a meth lab. We watch the scene from the beginning of the season of Walt inside his old home, taking the ricin from the back of the outlet. And we sort of know who the ricin is for while still having no earthly idea.

And then there’s Walt in that café, watching not-Matt Damon meet with Lydia. He pulls up a chair and asks them to listen for two minutes without screaming, running, or shooting. “You’re running out of methylamine, aren’t you? I did the math.” He tells them that he has a new method that doesn’t involve methylamine and can teach it to them. A coughing fit interrupts his scam. He needs the money, he spent almost all of his on the run, he only wants a million dollars, and the sudden appearance of the waiter ends their meeting. Was he there long enough to slip ricin into Lydia’s tea? No. Maybe. He knows where she goes for coffee on a regular basis, and she always sits at the same table. I’m guessing the non-fat sweetener is going to be the death of Lydia.

Walt is building a trap in the desert. There are guns and batteries and clamps and remote control thing-a-ma-bobs. He’s a man on a mission.

Skyler is sitting alone in a dumpy looking house, smoking her cigarettes like a good mom. She gets a call from Marie who lets her know that Walt is back. Skyler’s old neighbor saw him, and the police found a car he stole. After she hangs up the phone, we see Walt in the kitchen. He just wants five minutes, and she lets him talk. “It’s over, and I needed a proper goodbye. Not our last phone call.” He assures Skyler that those men who threatened to steal the baby are not coming back after tonight. He again tells that lie about spending the last of the money and gives her a lottery ticket. Walt tells Skyler to call the DEA, tell them that he forced his way in, that he wanted bacon and eggs on his birthday, and that he gave her the ticket. The numbers are coordinates of a burial site where they will find Hank and Gomez, and all of Walt’s money. He tells Skyler to trade it for a deal with the prosecutor to get herself out of this mess. Finally, Walt admits that he did all of this for himself because he liked it, and he was good at it, and it made him feel alive. He pets his sleeping baby on the head, watches Junior arrive home from school from the shed out back, and walks away.

Walt arrives at the Methies’ compound to teach them how to make meth without methylamine. After confirming that Walt is unarmed and unwired, the Methies let him inside of the clubhouse. Not-George Carlin tells Walt that they are not in the market for his new procedure. Instead, they will get a new batch of methylamine. Not-Matt Damon says, “You really shouldn’t have come back, Mr. White.” Then, there’s a gun to Walt’s head. But as soon as Walt drops Jesse’s name, and claims that Jesse is now partners, it offends not-George Carlin and he demands not-Matt Damon drag Jesse out of the lab immediately to show Walt that he is not a partner. While they’re waiting for Jesse, Walt is able to steal his car keys.

Jesse and Walt face each other and, without speaking, convey the desperation of the situation. Jesse wants Walt’s help. He needs his help. Walt tackles Jesse to get him to the ground was he pushes the button on his keyring, raining remote controlled bullets down on the Methies’ compound. Not-Meth Damon is still alive for about three seconds before Jesse brutally strangles him with his chains. Walt picks up the nearest gun and shoots a struggling not-George Carlin.

Jesse and Walt look at each other again. Walt slides the gun over to him. “Do it.” But Jesse won’t shoot until he hears Walt say that he wants this. And he does. But then Jesse spots blood on Walt’s midsection, puts the gun down, and tells him to do it himself. Jesse walks out a free man, owing Walt nothing.

Not-Matt Damon’s phone rings and it’s Lydia. She wants to know if it’s done. It is, but it didn’t go quite as planned since Walt picks up and explains that they’re all gone, and that under-the-weather feeling isn’t the flu. “Goodbye, Lydia.” Jesse and Walt face each other one more time outside, and Jesse gives Walt a smile and a nod before driving off and through the front gate. With his car all shot up and his stomach bleeding, Walt checks out the meth lab for old time’s sake while he waits for the police to arrive.

And that’s it. All of the loose ends have been tied up and the characters said what they needed to say to each other before…poof. Done. Though I’m guessing Jesse didn’t get very far speeding down a road that is about to be littered with police cars. It wasn’t a particularly exciting ending, but still. There are no unanswered questions and it was rather satisfying to watch Jesse kill not-Matt Damon. Sigh. No more Breaking Bad. Anyway, I’m looking forward to seeing what these writers and actors do next because this really was a masterpiece.